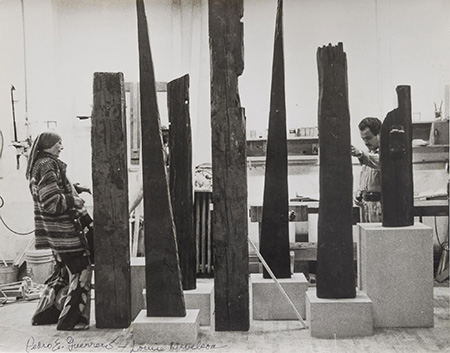 Pedro E. Guerrero was a photographer who is now being rediscovered, especially after the documentary "Pedro E. Guerrero: A Photographer’s Journey" was aired on PBS a couple years ago. In 1939 when he was 22, he found his life’s calling when hired by Frank Lloyd Wright to shoot the construction of Taliesin West. Wright so liked the results that he invited the young man to join his Fellowship, and Guerrero documented the architect’s work for the next two decades. By the 1950s he was much in demand as an architectural photographer, at a time when architects like Eero Saarinen and Phillip Johnson were becoming stars. Later he also became known for documenting the life and work of two major American artists, Alexander Calder and Louise Nevelson. This show concentrates on about two-dozen of these Calder and Nevelson photographs, and also includes several artworks by the two artists.

Guerrero was fortunate enough to be in the right place at the right time. He met Calder when assigned by House and Garden magazine to do a photo shoot at his home in Roxbury, Connecticut. The H & G editor quickly decided that his home was not worth publishing — “nothing was shiny or new there,” Guerrero later wrote. So ownership of the photographs reverted back to him. It was the beginning of a long friendship and, camera in hand, he often went over to visit Calder at his home and studio, even spending time with him and his wife at their farmhouse in France.

One photograph shows the white-maned artist at his cluttered desk, pen in hand and surrounded by small table-top creations, including two acrobats, one holding the other up. Another shows him framed between two gigantic prongs of his sculpture “Guillotine pour huit” while peering at work lined up along the walls of his studio in Saché, France. There’s palpable intimacy in these shots — they are largely unposed, and you feel you’ve walked into the artist’s life.

In 1977 Guerrero was introduced to Louise Nevelson by friends, who thought she would make a fascinating subject. He ended up thinking so, too, and did a series of photo shoots at her foundry in Connecticut, as well as at her Lower Manhattan home and studio, which were three buildings combined into one. Since Nevelson felt there was no separation between her life and her art, stacks and piles of “raw” material would be found in almost every room, as these photos show. She would regularly scour the streets of New York for found objects that she usually painted black before turning them into sculptural assemblages.

One tight shot focused on a corner of a room filled with found objects (discarded wooden parts for the most part) that are piled up but somehow organized and not chaotic, like her sculpture. Another shot shows a collection of miscellanea, all neatly arranged on a tabletop. Among the objects are metal nuts, a spike and a ceramic plate. Nevelson herself is captured in a few images, with the signature kerchief on her head and her multiple false eyelashes. These portraits feel more distant than Calder’s, as she is turning away from the camera and seems self-consciously posed. Guerrero himself is ever composing inside the camera, playing with shapes, balancing light and dark, and trying to find a fresh perspective that will lend insight to his subject matter.