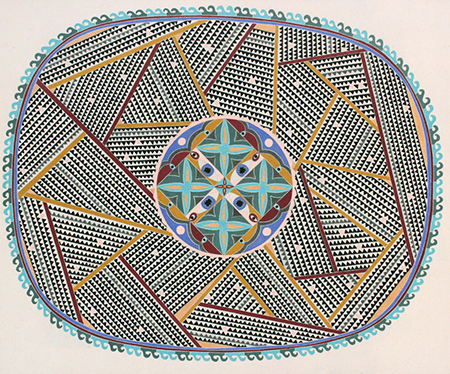 “Talismanic," the title of Catherine Colangelo’s current show, borrows a term that describes objects with the power to protect from harm. The painter has a history of creating works of art that guard or heal loved ones, and her latest pieces resemble shields, which have the ability to ward off evil. Eyes regularly appear, representing vigilance, watching for and warning against malevolence. “One-Eyed Shield” evokes an animal’s face with two black circles for eyes and a large snout. “Protector Shield” resembles an angel made with a repeating pattern of feathery forms. According to the artist, complex repetitive patterns confuse evil spirits and entrap them. In “Triangle Shield,” an oval shape contains an intricate pattern of triangles, parallelograms and other angular shapes. “Green Center Shield” is exceptionally detailed, with thousands of tiny equilateral triangles forming larger triangles that enclose a nucleus of crosses. “Game Shield,” on the other hand, suggests a bird’s eye view of a temple surrounded by steps and beyond that, a moat and gardens. “Spikey Shield” looks like a spiny sea urchin, its quills vibrating with energy.

Colangelo has been painting intricate, geometric patterns for years, and continues to be inspired by medieval illuminated manuscripts, Indian and Islamic miniatures, textiles and visionary art. Jewel-like and executed with nearly invisible brushstrokes, these mesmerizing paintings are made with gouache and graphite on muslin mounted on wood panels. She favors repetitive elements such as flower-like shapes, diagrammatic forms and small geometric shapes rotating inside larger ones. Seen as a whole they suggest masks, mosaics, rugs and other objects. Colangelo’s technique is to work as intuitively as possible, choosing colors as her pieces develop. She finds painting complex patterns both soothing and ritualistic. The mother of a teenage son, she paints late at night, channeling her maternal anxieties into these protective pieces. Works of art they may be, but if they also work as talismans for her family, so much the better.