It Has Happened Here
Editors’ Roundtable
Column by Bill Lasarow 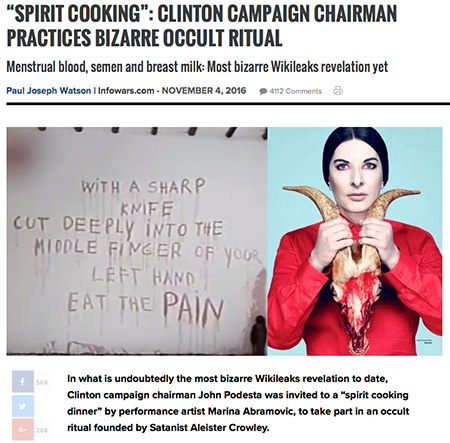 An illegitimate fascist President-elect is now settling in with his cabinet-in-waiting and Congressional supplicants. Given what we know now about the collaboration between Russian government hackers and Wikileaks, at the December 19, 2016 gathering of the Electoral College the electors should have declined to support this traitor. This would have been morally and constitutionally correct.

Those of us who are professionally and avocationally committed to visual and the other creative arts should no longer regard ourselves as beyond political repression. I don’t mean this to suggest that political content needs to enter into art’s discourse as counterweight or protest — it never absented itself. I mean that the carefree days of art as entertainment or fashion are drawing to a close. Fascist politics will demand an agenda not merely overtly hostile to free creative expression; its dreadful energy will drive directly into the bastions of free expression, First Amendment be damned and most especially wherever progressive dissent historically thrives. These folks would be delighted to replace the Cal Arts faculty with a less politically correct Hillsdale College crowd. They would welcome returning from the obfuscations of a John Baldessari to something more along the lines of, say, Albert Speer.

Back in July, former Bush administration National Security Council advisor William Inboden remarked that then-candidate Trump’s encouragement of the ever delightful Julian Assage's continuing dump of Democratic emails was “tantamount to treason.” Yet, even now that the CIA report has entered the public record, Democratic party leaders remain typically hesitant in their characterization; imagine were the shoe on the other foot (indeed, it is conservative critics who have been the most forthcoming in their use of language). This cowardice, not so-called “political correctness,” is their sin. Hillary Clinton has and, more importantly the country will now pay dearly for it.

One such hacked email featured Mrs. Clinton’s close advisor John Podesta’s account of a June 2015 “Spirit Cooking Dinner" gathering that featured Marina Abramovic, whose body of performance work, highlighted by “The Artist is Present” is familiar to most in the art world. I’ll return to its significance, but first, since this was a dinner gathering, let me set the table.

The new authoritarian reality is that Trump and mentor Steve Bannon’s brand of fascism is rooted in media rather than political theory, and Breitbart aims to replace the New York Times and NBC (along with CBS and ABC) as the key outlet for news and politics both here and abroad. Quoting a recent article headline to an article by Lloyd Grove, “Breitbart and Inforwars Become President Elect Trump’s New Media Establishment” (The Daily Beast, November 10, 2016).

So what, really, is the likelihood of this (and other horribles) happening? Consider how in the first days following the election the new supreme leader spoke graciously of Mrs. Clinton’s talent, intelligence and her hard fought campaign. Or his recent meeting with Al Gore to discuss the issue of Climate Change. A few of the announced cabinet appointees sound OK. Trump might even turn back plans to privatize Social Security and get a big infrastructure program funded. Maybe it won’t be so bad after all.

If Democratic party leadership engages in this kind of wishful passivity (not to mention the ever craven Republicans) and participates in even a limited collaboration with this fascist regime, in the fullness of time we will see the worst come to pass. A preemptive political strike will take place, and we may well experience our own version of the Enabling Laws of March 1933 (Google it my dear Millennials). I expect that the submission of the independent media that we have long taken for granted will be the first clear sign that free expression has come under direct attack. This will be an existential matter, not a polite exercise in conventional power politics. If political resistance is essential within that realm, the exercise of robust creative free expression is equally essential coming from our particular sector of society.

The instance that helps me get my arms around the reality of what is about to take place — it would be so easy to deny it is happening! — is that aforementioned "Spirit Cooking Dinner" hosted by Tony Podesta. Featured guest Abramovic did a series of performances twenty years back under that title.

Following Assage’s barbaric dump, the story about this innocuous event that ran in Drudge Report, Infowars, the Washington Times — i.e. the alt-right media “establishment” — produced headlines such as: “WIKI WICCAN: PODESTA PRACTICES OCCULT MAGIC” and “CLINTON CAMPAIGN CHAIRMAN PRACTICES BIZARRE OCCULT RITUAL.” For art folks the complex aesthetic of Abramovic’s performance is bracing and challenging, whether we respond favorably or critically to it. But for fascist propagandists it presented just another opportunity to mis-characterize it as a Satanist blood and sex ritual exactly four days prior to the election.

Quoting alt-right operative Mike Cernovich,  “It was a big story, driven through social media, and ended up going worldwide. If you’re from New York, you’re going to call it performance art. If you’re from the Midwest or the South, you’re going to call it cultist or Satanic, or even cannibalistic, ritualistic behavior.” Remember the NEA culture war of the 1990s led by field general Jessie Helms? That was nuthin’. Discussions about how too many art fairs have vastly over commodified serious art frankly now sound fatuous to my ear. The tar and feather crowd is primed to move on a tweet’s notice (just ask Megan Kelly) by the ostensible President of the United States.

So was Trump bluffing during the campaign? I think not. “In the old days … to the victor belonged the spoils,” Donald J. Trump, August 15, 2016.