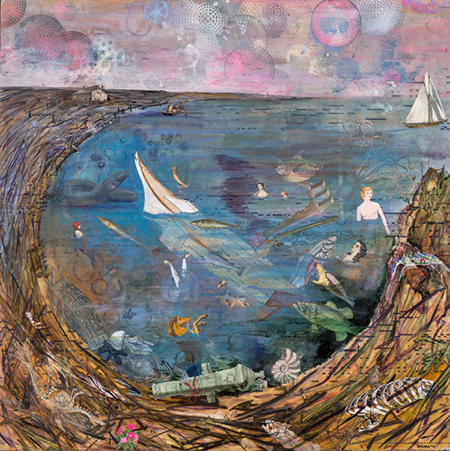 In a telling aside by one of the artists, the late Wes Christensen wrote in “Artweek,” “I try to make illustrations for stories that are not yet written.” Narrative art is one thing; illustration as an artistic goal is another, a troubling concern throughout the survey of 39 paintings and related works on paper.

For openers, identity and insight are clearly achieved in the individual figures and portraits on view. Bearing that in mind that, no narrative can occur without more than one figure. How can you have a story with only one person? That does not stop Fred Stonehouse from trying to turn one figure into two. “Split” (2015) combines a crying male nude torso with a skull and skeleton costume. “Home” (2016), a paint-daubed, bearded male figure, could be a self-portrait.

One of Christensen’s students, Shay Bredimus, addresses ethnic stereotypes in “Sage: Busan, South Korea” (2011), in which a standing female figure in traditional attire peers anxiously at an unseen watcher. Equally disconcerting, Tim Lowly’s “Rachael McHan” (2010) captures a young woman with closed eyes posed against a light-to-dark background. Such simplicity is welcome in an exhibit with many detailed, crowded compositions. “Trying to Get a Sense of Scale” (2012) depicts a figure about to lift a disabled person into a nearby wheelchair. Fully narrative, this work is dramatic yet mysterious and dark.

In the only frontal male nude, Christensen alludes to America’s endless wars in “Purple Heart” (1986). In a tender “broment,” a punk with a Mohawk haircut applies a tourniquet to the soldier wearing only a tee-shirt. Not at all illustrational, “Purple Heart” displays considerable narrative possibilities.

The best works in “Identity/Insight” are enigmatic and ambiguous despite their masses of recognizable detail. For example, “Package” (2013) by David Bailin is a big five-foot-square charcoal drawing with oil and coffee. A single, beaten-down figure in a winter forest suggests an ominous, violent event has just occurred. Without a second figure, the landscape supplies the narrative elements. Similarly ambitious is “When Jesus Swims, He Becomes the Ocean” (2015) by Eric Beltz. The Gothic typeface word-streams mimicking medieval manuscripts are superfluous. Symbolic birds such as a pelican surround a bearded, long-haired male about to submerge below the transparent water. His fate is evident without text blurbs.

Many of these artists are dependent upon explanatory texts, some of which run into hundreds of words, displayed next to the artworks, made more tedious by the inclusion of autobiographical information. Such a relationship is also connected to the pitfalls of the illustration genre. These are supposed to be fine art, not book illustration or illustrated memoirs. Language is not the subject here, as in some contemporary art.

Finally, New York artist Josh Dorman is the loosest of all among these otherwise tightly arranged compositions. “Shipwreck” (2014), an acrylic-and-collage, seems a whirlpool of catastrophic imagery that may echo Pieter Bruegel’s “Fall of Icarus” (c. 1553) with its similar aerial perspective and turbulent, rotating composition. Here and in his “Sunken World” (2016), Dorman creates vivid scenes that “unfold narrative” into satisfying realms of fantasy and implausibility with relieving, open-ended implications of meaning.