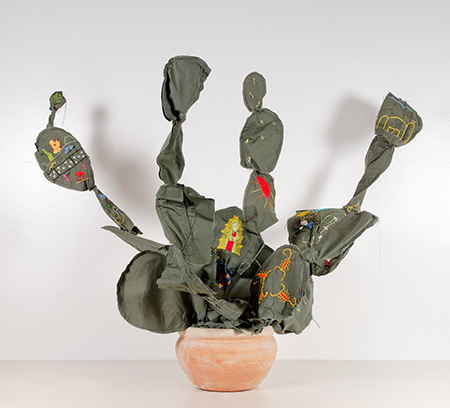 The surprising use of U.S. Border Patrol uniforms in “Space in Between,” a collaboration between Phoenix fiber artist Margarita Cabrera and members of the local community, is even more intriguing when viewed as a microcosm of Latin American immigration into Arizona. Under Cabrera’s direction, women and men with stories to tell about how they left their home countries reinvent those stories as folkloric fiber art. The exhibit’s title refers to the transitional space between countries and cultures, and the place where dialogue can exist.

The olive-colored uniforms — ready to be thrown out but recycled instead — are cut up into patches, then sewn into soft sculptures in the shape of cacti. Participants use brightly colored embroidery thread, felt, beads and even circular Border Patrol patches to embellish each life-size cactus, transforming something that could be symbolic of control, restrictions and public safety into ideals of freedom, education and democracy. The embroidered words and pictograms on the cacti center on family, home, identity, religion and accomplishments. An example is a young woman’s sculpture bearing the words “DACA” (Deferred Action for Childhood Arrivals) and “thank you,” along with a graduation cap. Another sculpture depicts the Arizona state flag and an outline of a Mexican map with three white crosses placed near the U.S. border.

Organized in part by the Arizona State University Art Museum, the exhibit is in a well-chosen space — a quiet indoor gallery amid the 140 acres of the Desert Botanical Garden, a highly visited sanctuary of cacti, desert trees and succulents.