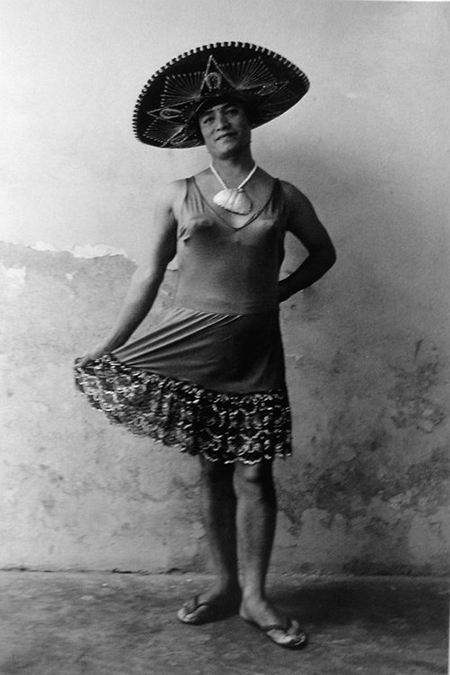 “He/She/They” attracts through its compelling topic. How do we define ourselves? And what is the most important part of our identity? Is it our gender, cultural background, sexual orientation, the peer groups we belong to or our careers? Does one part dominate the other? One thing is for sure, “He/She/They” proposes, traditional male dominance is endangered. The way has been paved for people with varied sexual orientation in multiple ways. Same sex marriages are legal. We celebrate occasions such as “National Coming Out Day” and “Pan (Pansexual and Panromantic) Visibility Day”. A film like “The Danish Girl” made it to the Oscars this year. And the Obama administration is telling schools to allow transgender students to use bathrooms according to their gender identity.

Considering these societal developments, this group show — a potpourri of color and black-and-white images by Katsumi Watanabe, Manuel Alvarez Bravo, Diane Airbus, Graciela Iturbide, Wayne Lawrence and others — is not only sparkling, but demonstrates that where we are today has truly been decades in the making.  Watanabe’s work here focuses on the cross-dressers of the entertainment and red-light district in Shinjuku, Tokyo, Japan. For example, there is the photo of a made-up man with a pageboy wig and a polka-dotted dress slightly smiling into the camera. In Bravo’s portraits of writers Salvador Novo, Zavier Villaurrutia and artist Frida Kahlo, gender seems to play a minor role, but intellect comes to the fore. In Graciela Iturbide’s images the emphasis is on the high respect for “two-spirit people” in Native American communities. “Magnolia Juchitan, Oaxaca” (1986) is an image of a man in sandals and a sombrero, wearing a short dress complete with breast padding.