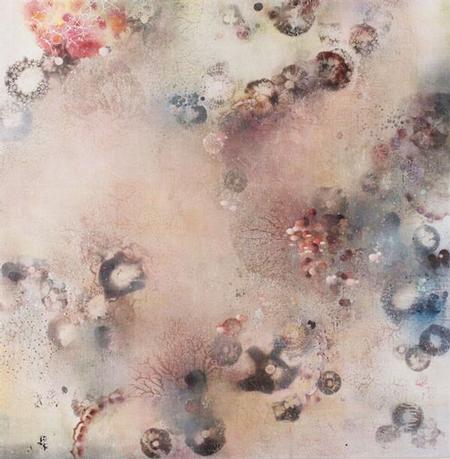 Among Oregon’s natural wonders is its abundance of morels, chanterelles and other wild mushrooms. While many Northwest artists — especially landscape painters — evoke the fungi-filled forests and organic forms of the Cascades, Marlana Stoddard Hayes literally incorporates them into her paintings, which, perhaps counterintuitively, are abstract. After gathering mushrooms from her woodland property along the Willamette River south of Portland, the artist selectively applies them to dry panels, covers them with cloth or paper, then waits for the spores to drop and spread their tendrils (or “Hyphae” — also the exhibition’s title) in complex, branching patterns.

Essentially, it’s printmaking using mushrooms instead of inks. The longer the spores grow on the panels, the darker they become.  With the addition of pigments, resins, and other media, she integrates the fungal patterns into abstract compositions such as “Penumbra” and “Alluvium,” in which ovular forms waft across the picture plane like floaters or phosphenes drifting across the retina. Given the unusual medium, it is impossible not to infer ecological or even mystical connotations from these unique and visually serene works, which seem to speak in pagan incantations, reminding us of the earth we tread so cavalierly upon.