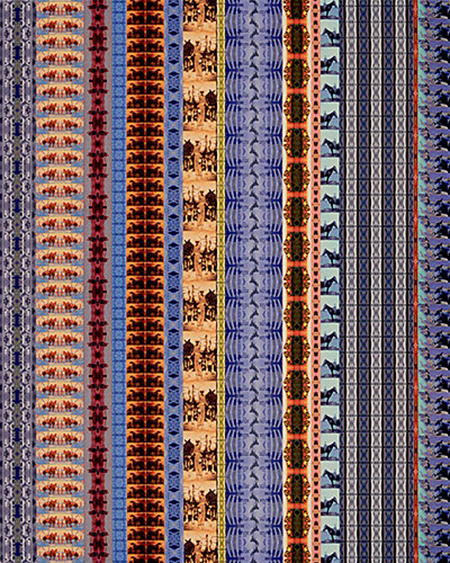 Dana Hart-Stone’s photographic archaeology celebrates anonymous “everyday people” who built the American West we have inherited. The artist selects and digitally copies anonymous twentieth-century snapshots, banal in their time but now rendered poignant by its passage. He aligns them in vertical strips, with left and right mirror images alternating, and sometimes positive images alternate with negative. These colorful cascades of photos are nostalgic without becoming elegiac. The good-natured tone is reinforced by witty titles such as "Larry’s Lariat,” "Horse Of Course" (referencing the talking-horse sitcom, "Mister Ed”) and "Whiter Whites” (a TV ad line for a laundry product from the same era).

Like quilts, the paintings commemorate the vanished past; like films, they celebrate the evanescent present. Hart-Stone’s skillful orchestration of pattern and color unifies the disparate elements into compelling images that from afar can be read as color-stripe abstractions. "A Western Trip” is comprised of six paintings: four of medium to large size, mounted on a single stretcher; and two, "Whiter Whites" and the show’s title work, attaining the size of small billboards, with the latter made up of eight seamlessly aligned stretchers.