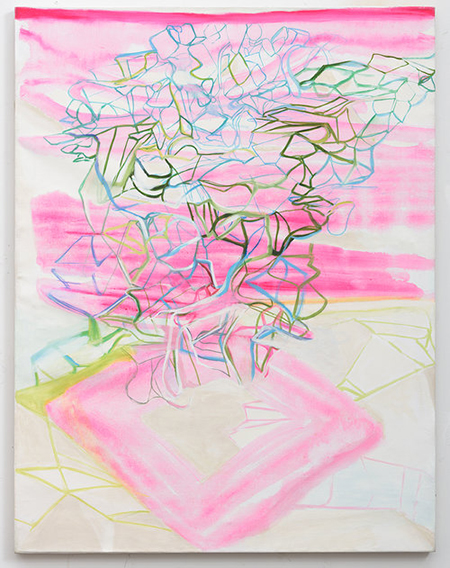 Rebeca Puga calls herself a very “slow painter, it takes me a long time to make them,” although the works themselves have a deceptive simplicity that makes them look as if they might have been created in a single dream-like session. Created over a period of years, these abstract works are each focused on Puga’s approach to environment. This environment appears to be metaphysical as much as physical, as she approaches the world around her externally, and additionally, through subjective perceptions of time and space.

There is a sense of possibility in her works that go beyond the canvas, as if each piece were still in transition between the visible world and another dimension. Whether it is the cooler, thicker pink forms giving birth to the finer lines and geometric patterns of “Ice Pink” or the ladders and lines of “Home Structure,” a dwelling floating in air, Puga’s shapes create light and space that trembles tantalizingly on the verge of deeper meaning.