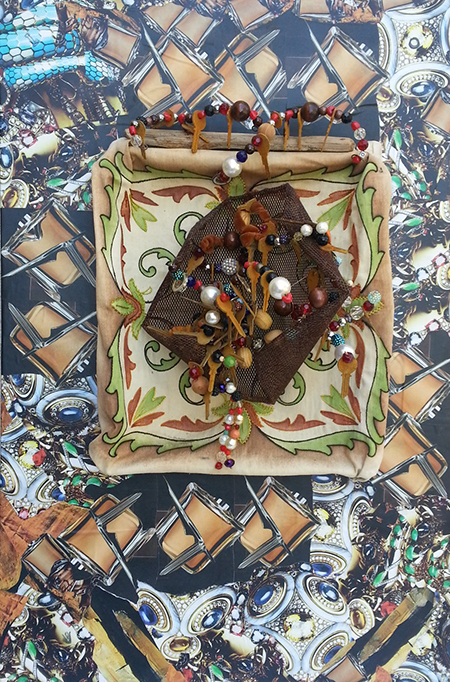 An exhibition of recent work by seminal assemblagist George Herms is, among other things, an opportunity to reflect on what ties assemblage to modernity and what relevance it might retain for a contemporary audience. Herms’ practice suggests that it has something to do with affirming memory and connection in a world that grows ever more atomized and amnesiac despite (or perhaps, because of) its technological interconnectedness.

From its origins in pre-World War I cubism, assemblage has been fodder for both formalists and socially engaged artists. Some of the earliest and most acerbic assemblage was produced by Berlin Dadaists. But there was also Kurt Schwitters, who found in assemblage a lyrical medium with which to apotheosize everyday life.

Others discovered in assemblage a means to create uncanny objects charged with illicit unconscious desires. Following in the footsteps of Freud, who at the turn of the 20th century proposed that dreams are themselves assemblages of “day residues” haunted by repressed memories, the surrealists exploited the oneiric possibilities of assemblage. In postwar New York, Robert Rauschenberg’s “combines” added a decidedly American flavor to assemblage by distancing it from the self-conscious poetic conceits of the surrealists and pushing it in the direction of a proto-Pop pastiche of exhausted signifiers that barely retained a symbolic function save that of connoting the exuberant profligacy of the then-nascent consumer culture.

In California, Ed Kienholz used assemblage to create an incandescent body of politically dissident art, the intensity of which has rarely been matched since.

Another Californian, Herms, started making assemblages in the mid-fifties under the influence of Cornell. His work occasionally wandered close to political statement, as when in 1963 he exhibited a work titled “Macks" that featured a crumpled American flag pinned along with a photograph of a woman and a deflated bicycle inner tube to what looks like the decaying remnants of a section of lath wall. The work was pilloried by the American Legion for disrespecting the flag, but its irreverence was primarily anti-authoritarian rather than anti-American. Like others of the Beat generation, Herms became a connoisseur of a peculiarly American brand of squalor because it was part and parcel of life lived outside the pale of middle-class or even working-class convention. To make art out of what others threw away was to magically invert a social hierarchy based on material wealth and gain access to a milieu whose currency was nonconformity and whose exclusivity was presaged on a coolness unattainable by squares.

In Dave Hickey’s words, this fifties underground milieu was “more social than public.” In this countercultural setting “the emphasis is always on the bond between all artists and all the arts.” Thus, in Herms’ case, assemblage is a practice that intimates assembly, the coming together not merely of disparate bits of junk but also of the select audience that can appreciate the improvisation to which the work (like a bebop jazz performance) attests.

Upending junk’s status as waste, Herms fastens upon the aura that the use and abuse of objects deposits on and around them. Hickey is right to assert that “Herms never made a work except out of love,” but the proof of that is not simply that so much of his work is dedicated to others (artists he admired, friends, lovers), but that it consists entirely of lavishing care and attention on objects whose value is determined by neither use nor exchange but purely by affinity. Herms’ objects are in the strictest sense love objects, which is to say objects that desire has transmuted into desirable objects and that subsequently embody the potency not of anything inherent in them but of the desire that found in them its own reflection.

Titled “Pipe Dreams,” the exhibition at OCCCA, an artist-run space that owes its inception to the advice Herms gave his Cal State Fullerton students back in 1980 to create their own opportunities, brings us up to date with what Herms, now 81, has been up to in the last couple of years. The 50 or so objects on display don’t break any new ground nor, based on the level trajectory of Herms’s output over the years, would one expect them to. As the Dude said of himself in The Big Lebowski, “The Dude abides.” Herms abides. We are grateful.