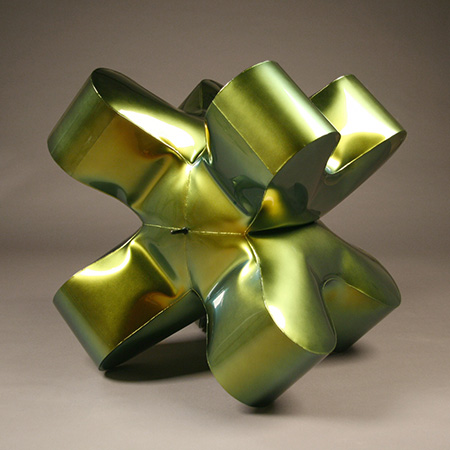 William Cannings is experimenting with new shapes executed on a larger scale and finished with dazzling colors. “Arc” and “Centered” are variations on a simple, life-sized stick figure with an inflated inner tube for a head. Measuring just over five feet, they stand guard in two different areas of the gallery – impassive, pensive, totemic. Like many other pieces in the show, they are painted with iridescent Kameleon paint, which shifts color depending on the light and angle of viewing. There are several different colors involved in Kameleon paint, and this particular piece ranges from a rich copper to a vivid purple; small indentations in the surface emphasize these color shifts. The tour de force in the show is “Applejack,” a symmetrical piece shaped roughly like a jack (as in the child’s game, ball and jacks) and painted a luscious Kameleon green with undertones of copper. The title is obviously associative, inspired by green apples and the shape of the piece, but Applejack also refers to a Scottish immigrant who came to New Jersey in 1698 and was involved in the production of a Scotch he named Applejack. Cannings was born in England but sometimes wears a kilt to his openings, a nod to his Scottish ancestors.

“Exposed” is one of the most eccentric pieces in the show, its shapes looking like two large “ear horns” joined at the ear end and balancing on one curved edge. Also painted with Kameleon, it is green on the inside and black on the outside, and seems to be listening to the sounds around it. Several wall pieces suggest masks or helmets. The largest is “Trophy,” which looks a bit like the robot’s head from the 1951 movie, “The Day the Earth Stood Still.” Another piece with anthropomorphic qualities is the bright orange “Leaning.” It is essentially a large standing three-dimensional triangle with its pointy “head” leaning against the wall. In the large nook at the back of the gallery, Cannings presents a group of small, brightly colored pieces that reference earlier work: using steel, he creates flat organic shapes which he then fills up with compressed air to create floating bubbles and pillows. Titled “Swarm,” they are suspended from the ceiling with invisible monofilament. Cannings continues to experiment with the surfaces of the sculptures, but even more substantial changes are reflected in the intriguing shapes of the larger pieces.