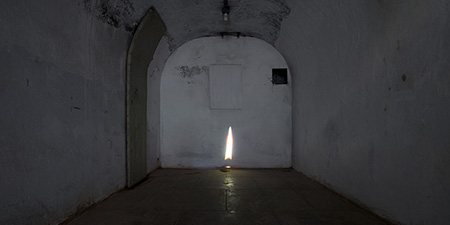 We recently marked the fifteenth anniversary of the 9/11 attacks, which catapulted us into wars in the Middle East (the juggernaut’s wheels well greased with clash-of-civilization political theory and oil geopolitics). And we’re in the midst of a presidential campaign gone off the rails, exploiting similar tensions. What better time for an exhibition of contemporary art about surveillance and security? What better place than San Francisco, that paragon of blue cities and longtime subrosa helpmate of the military-industrial complex? Where better within San Francisco than the abandoned gun emplacements in the Presidio, a former army base, now decommissioned, overlooking the Bay, just a short stroll from the Golden Gate Bridge?

If "Home Land Security" reminds you of the Ai Weiwei exhibition at Alcatraz, "@ Large," in 2014-15, it should: both are partnerships between San Francisco gallerist Cheryl Haines' FOR-SITE Foundation (which is responsible for the site-specific Andy Goldsworthy sculptures at the Presidio), the National Parks Service and Golden Gate National Parks Conservancy, with the Presidio Trust added to the mix, this time. Just as the aura of Alcatraz as former prison and Indian-occupation site lent gravitas to Ai Weiwei's conceptual works on history and politics, the gun emplacements here at Fort Winfield Scott make a compelling setting for the work of eighteen contemporary artists from eleven countries on the worldwide digital-age conflict between security and freedom.

Emerson famously wrote that money costs too much, and some of us feel that Americans' concern for safety does too (especially in election years). But the artwork in this show refrains from propagandizing, opting instead for the interrogatory or documentary mode of conceptual art: a position that presents the facts with an expanded context, and letting you decide: it's more fair and balanced, frankly, than inundated news victims may be used to these days. Haines: "By placing art that examines security's human cost inside former military sites, "Home Land Security" provides a powerful context for considering the perceived need for defense and surveillance, and looking at how fear of '[the] other' can obscure commonality of human experience and contribute to cultural misunderstanding."

General Winfield Scott was the hero of the Mexican War — there was no wall then to repel gringo invaders — and the initial commander of all Union forces in the Civil War, later replaced, as he had grown both too old and too large for the requisite maneuvers on horseback. Fort Winfield Scott, built at the northwest tip of the San Francisco peninsula in 1891, during the Cleveland administration, protected the bay for three generations, from 1891 to 1946, when technological change rendered its seventeen twelve-inch Endicott guns, firing 1070-pound shells, obsolete. "Home Land Security" disperses its artworks among four concrete buildings and bunkers — the Nike Administration Building at 1648 Langdon Court, named after the intercontinental ballistic missile and Greek goddess of victory (no, not the shoe), and Batteries Godfrey, Boutelle and Marcus Miller, all named after military heroes — as well as the New England-style clapboard Fort Scott Chapel, across the busy street leading to the Golden Gate Bridge. The contrast between the picture-postcard bay views and the grim, crumbling, Spartan digs, as at Alcatraz, or Fort Point, beneath the Golden Gate Bridge, could not be more poignant.