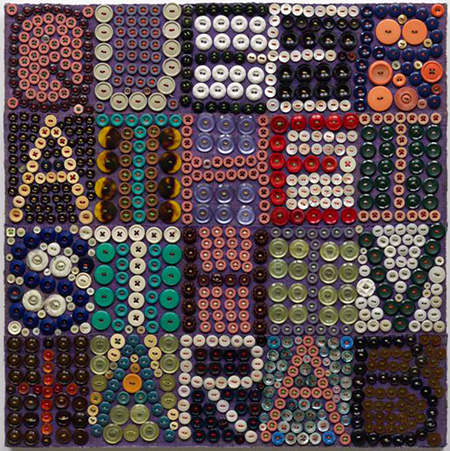 The canvases of artist and art critic Jeff Perrone have a hand-wrought, domestic nature that belies their startling content. Buttons are carefully sewn onto tactile Malian mud cloth in gridded compositions, each square bearing the shape of a letter in buttons with colors contrasting those of the background. As Perrone’s canvases are of modest scale, the irregular sizes of the buttons closely sewn together make reading the letters and words a somewhat laborious task. This smart, simple tactic forces a viewer to linger, and as one solves this formal puzzle, the messages are revealed: “LUST,” “SHIT,” “SLAVE LABOR BUILT WHITE HOUSE,” “QUEER ATHEIST HIV+ ARAB.” Determining these words and phrases almost requires sounding them out loud, resulting in surprise when the harsh or polemical messages come out of one’s mouth.

While Perrone’s materials are as homey and charming as a throw pillow embroidered by grandma, when one discovers these words and reads his messages, the works are never again merely formal. The material forever after gives way to the overwhelming power of words.