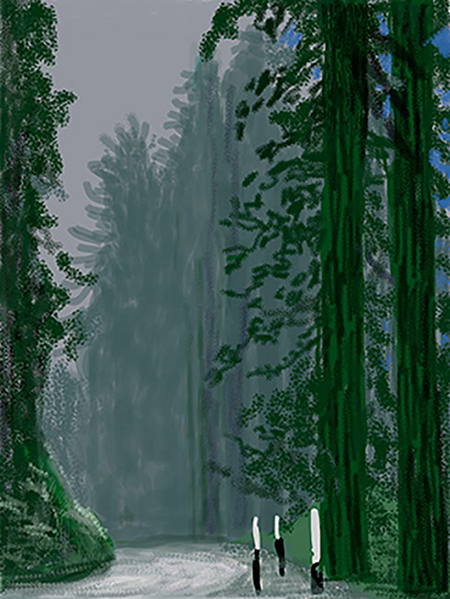 The portrayal of America’s national parks, whether by means of photography, film or painting can deliver political messages. Photographer Ansel Adams used his images of Yosemite National Park to help protect and preserve the environment and wildlife. Screenwriter Callie Khouri ("Thelma and Louise") used scenes of Grand Canyon National Park as a symbol of freedom. David Hockney’s “Yosemite Suite” iPad drawings, however, appear to be rather a form of self-expression, stressing the invigorating and joyful experience of being in that most iconic of America’s natural environments. Thus, Hockney’s juxtaposition of luminous yellows, turquoise and cobalt blues, or creation of contrasts through purples, pinks and bright reds, turn one of America’s most famous national parks into a symphony of vibrant hues.

His iPad drawings are rendered skillfully, his digital mastery conveying a sense of the texture of the plants, rocks and trees and the various perspectives from which Yosemite is observed. In “Yosemite III, October 5th, 2011” we’re looking at a path that leads into the shadowy woods. The grey sky and nebulous forest imbue the image with a feeling of mystery. “Yosemite 1, October 16th, 2011“ is a view of Sequoia trees from the top of a cliff, the artist recording how they reach into the sky, competing with the height of surrounding mountains. Apart from the brilliant colors, it’s the balanced compositions that makes “Yosemite Suite" aesthetically pleasing. In many of these images one will find symmetry, sometimes created by a tree trunk positioned in the center of the painting, at other times by outlines of hills or other objects meeting in the middle. Furthermore, they reflect Hockney’s love for literature, in particular Walt Whitman, who once said “The United States themselves are essentially the greatest poem.”