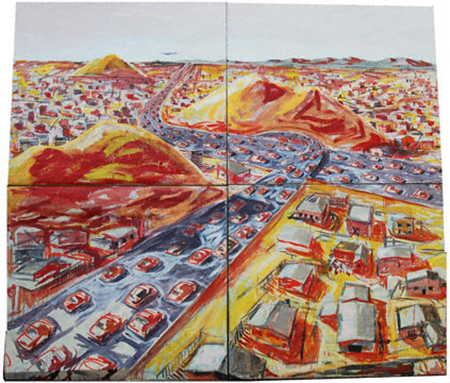 Frank Lloyd Wright is credited with saying: “Tip the world over on its side and everything loose will land in Los Angeles.” Wright was addressing the city’s strongest characteristic, its ability to absorb all trends, styles, traditions, and influences. The growth of L.A. from a Mexican pueblo to a major metropolitan center defies a simple description. Yet L.A. is now the most diverse city in the nation, an astonishing feat for a city that is often reduced to a stereotypical image of the Hollywood sign. Karla Klarin grew up in the San Fernando Valley and decided to remain in Los Angeles after short stints in San Francisco and Italy. The absence of a center and the many banal aspects of L.A. not only inspired her, but she thrived off this and found it to be encouraging as a young artist. This is an enthusiasm that has carried her for close to four decades, and is now the subject of a career survey.

Curator Damon Wilick organized “Karla Klarin: Subdividing the Landscape,” comprised of imagery from several different series beginning in the 1980s to the current day. The common line of inquiry is Klarin’s fascination with the ordinary and mundane aspects of Los Angeles. How we create spaces here for ourselves and make them our own is an important process, not least an artist working in a particular location. The growing cityscape has consistently expanded outward and upward at great speed but this does not mean these spaces have been cared for or were carefully planned. From abandoned buildings to a skyline that lacks thoughtfulness, Klarin’s work often emphases these overlooked corners and perspectives to great effect.

"A Loft on Mill" (1980) begins the show with Klarin’s early interest in Los Angeles architecture. This realistic depiction of a building sits on the corner like a discarded shoebox. The cube of a building is broken up by several sets of nostalgic windows that once took advantage of 20th century building materials. The Bauhaus inspired design is past its due date and now likely home to new visitors for which it was not designed. The dull color of the building and the lack of distinguishing characteristics leave the viewer with a sense of despair and loneliness for this skeleton of a building that displays no vibrancy or signs of life.

Most of Klarin’s early works are such realistic depictions of the city of Los Angeles. Those who live here will recognize the subjects. However, there is a shift in Klarin’s work in the 1990s, when she began to stylize the landscape and utilize a color palette that is much more expressive. A good example is "Drive Thru" (1996), featuring a grey freeway that merges and meanders through and around a few small foothills. Gridlocked cars, quickly painted with a repeating color scheme, completely fill the roadways. The yellows and red in the landscape radiate a warm temperature that begs for a cool breeze. Images of traffic, residential areas that are tucked in the open spaces between the roads and cars, demonstrate the tight context in which we live and the ironic uniformity of these personal spaces.

Klarin’s paint handling gets more exciting with experience. Her forms create dynamic points of tension as they progress further into abstraction. The paintings from the 2000s mark this transition and are some of the most stimulating to date. The landscape is divided into sharp, geometric shapes  that the artist fills in with planes of color. "Landscape Study/NH #37 & #38" (2014) is a diptych that lifts the horizon line to the top of the composition. The mauve sky pushes against a black and white checkerboard landscape that holds us at a distance. As the scenery is divided into abstract shapes, it resembles a perspective as seen from an airplane.

The expressionistic aspect of Klarin’s work from the last decade continues in a number of studies that reduce the recognizable aspects of the city to linear and expressive forms. Richard Diebenkorn's "Ocean Park" series and also a bit of David Hockney’s views of Los Angeles are present in these colorful renditions. Only someone who truly embraces the city and can feel the energy that pulses in it could paint like this. Klarin captures a different aspect of this vitality in each of her canvases.

When reflecting back on Klarin’s history, one can see how her accumulated understanding of Los Angeles and her expanding knowledge of painting come together in the most recent work. "Natalie’s House #3" (2014) returns to her early interest in single dwellings, but is updated by her strong painterly brushwork and geometric line work. The horizontal composition highlights an individual home by using shades of pink, and it’s this personal association that signifies it as a special place set against the dullness of grey driveways and lawns.

The sense of place is present throughout this survey. This is not a stereotypical depiction of L.A., these are real contexts that shift from cold and isolated to warm and filled with emotion. L.A. is the subject of choice, but Klarin’s own history is on display as the subject reflects a most personal sense of place.