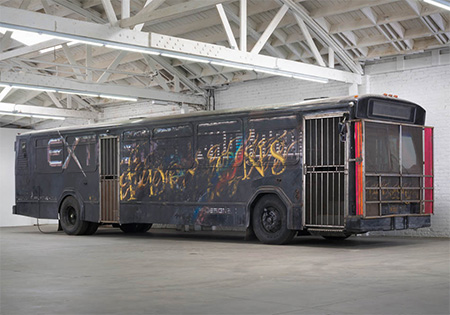 “Piston Head II” is a group exhibition that's custom-made for Los Angeles, presenting the automobile as fodder for art. Using the cars themselves as sculptural forms, the widely varied vehicles each tell their own story, some whimsical, some dark. Gallery director Belen Piñeiro notes that the exhibition takes as its starting point the gallery’s 2013 “Piston Head” exhibition in Miami. “Here we have the space to include many cars in an exhibition that is suited to the history and identity of Los Angeles,” she says. “Some cars were newly commissioned for this exhibition, others already were an inherent part of the artist’s practice.”

Kenny Sharf’s “Daisymobile” has a flower and fish motif, right down to daisies on the hubcaps. The delightful, pastel redesign of a 1975 Pontiac Gran Ville includes Swarovski crystals and diamond dust. Sterling Ruby’s “Bus” is a behemoth, dark and ominous with its caged interior seating and massive sub-woofers and speakers lit by florescent light. Will Boone’s “Car” is a custom Chevy Blazer, whose cargo bay has been transformed into a red lit bedroom that’s adds a new dimension to the Los Angeles stereotype of living in one’s car. Milan-based design shop Garage Italia Customs is represented by several customized creations prepared specifically for this show.

In “Piston Head II” we see the personality and sensuality in cars, the possibility of sculptural form with a fashion sense added to their functionality. These cars form their own metallic canvas, one which reflects and embodies the identity and desires of each driver/artist.