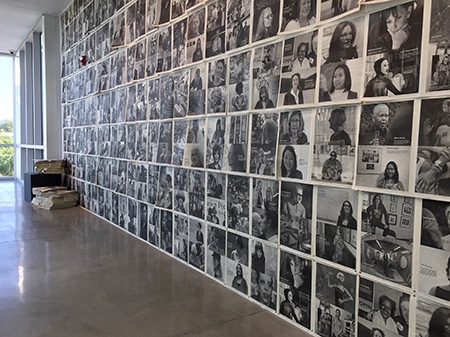 Recently, a number of exhibitions around the country have stimulated my interest in group photography within contemporary art. In three of these exhibitions, artists and curators have arranged individual portraits in grid formations that bring to mind the many photographic matrices that fill the pages of Facebook and other social networking sites. In each project, the works combine to create a unique portrait of a community.

At the Lancaster Museum of Art and History (MOAH), Eric Minh Swenson exhibited over 200 photos of Los Angeles-based women in the arts. Produced in collaboration with Coagula Art Journal, the exhibition was titled "Art Stars," a moniker that reflects L.A.'s cultural preoccupation with celebrity. Installed in the MOAH galleries from floor to ceiling like wallpaper, the images were of female artists, curators, writers, gallerists and collectors, all of whom have contributed to the diversity of the L.A. art scene. In lieu of traditional labels, short text about a subject's cultural role, written by Coagula editor Mat Gleason, was printed over each photo. Additionally, stacks of takeaway copies of a special Coagula edition featuring over 150 of the images were situated on the floor adjacent to the installation.

During the course of his work as an accomplished filmmaker, Swenson has been methodically documenting the L.A. art scene, and thus he approaches his tasks much like a photojournalist. Rather than being staged, his photos are taken during the normal course of a subject's activities, such as working in the studio, hosting an event, or mingling at a reception. Whether looking at the photos in situ or in the zine, there is vastly more information that one can absorb in a single viewing, which is why the Coagula version is of particular value. Overall, the images in Swenson's collection are quite varied, with the most compelling examples being those where he has zoomed in to capture a subject's facial expression, wherein one can observe signs of strength, confidence, and endurance — testaments to the fact that, as women, many of these individuals have overcome considerable obstacles to achieve their successes in an art world that has been traditionally dominated by men.

In San Antonio, Ramin Samandari has also focused on the contemporary art scene. In concurrent exhibitions at the Department of Cultural and Creative Development's Plaza de Armas Gallery and Window Works, the window installation space at Artpace, he has assembled over 250 printed and slide-projected portraits from his "Faces of Art Project" (disclosure: I am one of the subjects). Engaged in the same occupations as Swenson's subjects, the men and women in Samandari's photos are all shown from an identical vantage point, from the neck up. In contrast to Swenson's role as someone who moves about inconspicuously as a casual observer, Samandari is more of a director. He chats with sitters before giving them instructions to close their eyes and then open them, at which point only one image is taken. It is a moment of silence when an awakening occurs, and, with the aid of Samandari's precise lighting, a subject's inner soul or spirit becomes strikingly visible.

The third exhibition is at the Cape Cod Museum of Art in Dennis, Massachusetts, where Jon Goldman has installed 60 digital prints from his "Village Portrait Project." When completed it will include portraits of 781 full- and part-time residents of Woods Hole, a tiny village located at the Southwestern tip of Cape Cod. Although some of Goldman's subjects are artists, his objective is to capture the essence of the village that is home to Goldman, musicians, writers, oceanographers, marine biologists, students, fisherman and other members of the working class. Whether they are family, friends, colleagues or strangers, Goldman's subjects are first photographed with the artist's iPhone. Then, after uploading the snapshots into Photoshop, Goldman digitally enhances each face while adding in colorful abstract backgrounds of rhythmic patterns that reflect the vibrancy of Woods Hole and its community. Whereas Swenson contributes to our appreciation of individual achievement, and Samandari provides a path to empathic awareness of the collective human spirit, Goldman investigates a communal sense of place.

In thinking about these three exhibitions, I am reminded of the strong inquisitiveness that in the 1920s drove the German photographer August Sander to attempt to photo-document every type of human physiognomy. Now, almost a century later, it is exciting to observe the multifarious directions that are being taken in a similar vein to recognize, understand, and commemorate what it is to be human, and how, in one way or another, we are all connected to each other.