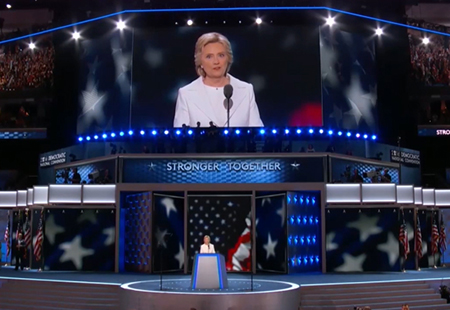 And it came to pass that the wise men of both major political parties, having searched the country high and low, decided on their champions: the battle-scarred veteran, Hillary Clinton, and the exciting Batman-cum-Joker, Donald Trump. Adherents of the candidates expect miraculous transformations, while those of us who remain unswayed by Clinton’s breaking of the gender glass ceiling and long CV (the latter also being George Herbert Walker’s Bush’s claim to fame, in 1992, against his upstart rival, Bill Clinton) or Trump’s reputed toughness and business savvy (both under question because of his flipflops on every issue, bankruptcies, lawsuits, and secrecy regarding his tax filings), look on with a combination of stoicism and dread. What a thrilling reality show! Which contestant will survive; which will be fired by the voters?

As a Facebook friend pointed out, past U.S. Presidents from both parties can boast a long list of unsavory practices, from Truman dropping the nuclear bombs on Hiroshima and Nagasaki when it was militarily unnecessary, to Reagan funding a secret war for the contra military dictatorship against Nicaraguan Sandinistas with CIA drug money, to the foreign policy snafus by both Clintons. They conclude, “I abhor Trump but to get real about this ... whatever this sick megalomaniac Trump really is, he has never done what the above have actually done.” Revelations about the Democratic Party’s antidemocratic electoral machinations against the Sandernista insurgency, substantiated by internal e-mails leaked by Putin’s KGB hackers in order to help Trump (who then encouraged them to keep digging) are only the latest turn in this exciting cliff-hanger.

I supported Sanders, and will vote for Hillary to stop the loathsome Trump, but the continuation of gradualist, evolutionary, status-quo politics post-Obama seems to me unimaginative and uninspiring. As TV host Seth Meyers commented, adjuring Bernie-or-Busters to smell the coffee, and support Clinton, as Bernie himself had, ”We don’t have time for this.” Whoever is elected will not measure up to Obama, the modern gold standard for presidents (despite TPP, banisters and other imperfections), and will find the country evenly divided into red and blue existential enemies. Liberal commentator and Sanders-then-Clinton supporter Robert Reich opined recently that the real dichotomy is between those who believe in democratic government (with all its blemishes), and those who believe government per se to be inefficient, wasteful and corrupt (with some justification, of course). The latter group, “bitter clingers,” in Obama’s memorable and accurate characterization, goaded by smoking-gun Tea Party rhetoric, are still buying guns, preparing for feudal warlordism in the Mad Max world to come. Apocalypse is apparently preferable to racial equality for the devotees of Jesus, their construct of the Constitution and ‘greatness.’

All lives matter, of course, but that includes, does it not, the black lives snuffed out by our militarized, paranoid, trigger-happy police? How has the country that once prided itself on being, in President Reagan’s words (appropriating Jesus’) “the shining city on a hill,” fallen so far as to make other nations doubt our sanity? The spiritual and material aspirations of Americans have always jockeyed for dominance. As Americans have in general grown less religious and less serious about our personal morality, we have become more sanctimonious and judgmental toward others, and the religiose Bible-thumpers are not the only sinners. Everyone seems perpetually on the brink of being offended and looking for an excuse to go ballistic.

In Mike Nichols’ classic political drama/satire "Primary Colors," based on Joe Klein‘s novel about the  ‘Jack Stanton’ campaign, a decent but flawed rival politician, played by Larry Hagman, drafted into running, cautions his ecstatic crowds: Let’s just calm down here, let’s take a minute to think. Partisanship has been at uncommonly high levels this election season, exacerbated by a never-ending 24/7 news cycle driven by hits and dollars, and the internet’s anonymity and impersonality: we need never meet the people we so cavalierly insult from our keyboard soapboxes and pulpits. Too many articles have headlines promising triumphant exultation as someone schools an opponent. President Obama, who might be considered the Lightning-Rod President for the furious, groundless attacks on him by Teflon-President worshipers, passed the torch on Wednesday at the Democratic National Convention: “So this year, in this election, I’m asking you to join me, to reject cynicism and reject fear and to summon what is best in us; to elect Hillary Clinton as the next president of the United States and show the world we still believe in the promise of this great nation. Thank you for this incredible journey. Let’s keep it going, God bless you. God bless the United States of America.” Let’s not let democracy, however imperfect, descend into tyranny; let’s prove Plato and the aristocrats wrong, and the Founding Fathers and Lincoln right, and govern ourselves better.