100 Years of PNCA
Portland, Oregon celebrates an art school whose DNA is interwoven with its own
Feature by Richard Speer 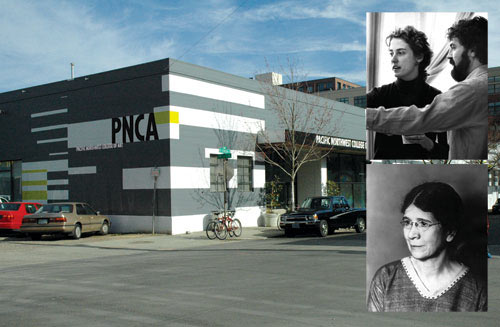 Imagine—It’s a Wonderful Life-style—what Portland, Oregon would look like if the Pacific Northwest College of Art had never existed. While the city would not, one hopes, be a dead ringer for the Capra film’s dystopian “Pottersville,” it would also most certainly not have developed into the rich hub of art, design, and craft it is today. Considering that hypothetical scenario, Dr. Thomas Manley, President of PNCA for the past five years, muses that without the school, “the arts landscape of the Northwest wouldn’t exist in the way it does now. The three or four generations of visual artists who came to Oregon because of the school and took classes here—as well as artists like Louis Bunce who studied here, went to New York, then came back and taught at the school—would not have contributed to our history, and a lot of things we take for granted today would disappear. You wouldn’t have Timberline Lodge on Mount Hood, because the craftsmen and artists who made it so extraordinary were students at the school. You wouldn’t have the work of Lee Kelly, whose sculpture graces public spaces throughout the city. You wouldn’t have the gallery scene that grew up around Arlene Schnitzer and Elizabeth Leach and Jane Beebe. The paintings of G. Lewis Clevenger, Lucinda Parker, and other artists in the current generation—you would lose that.”

Founded in 1909 by Anna B. Crocker, the institution was known until 1981 as The Museum School and was initially a teaching arm of the Portland Art Museum. As Oregon’s first professional art school, it fostered a nuts-and-bolts approach to the rudiments of traditional media: drawing, painting, and sculpture. During the Great Depression, the school educated artists went to work for the Works Progress Administration. Design became a burgeoning part of the curriculum in the 1940s and 1950s, with photography introduced in the 1960s. The 1970s and ’80s saw simmering internal and external tensions mounting in the community to separate The Museum School from the museum that had spawned it. Among civic leaders there was a slow-burning contention that both institutions needed their own physical and intellectual spaces to develop uncrowded by the other. The separation happened in the mid-1990s and in hindsight it is widely agreed to have been a positive move. In the 2000s, a decade that has seen enrollment double and ambitious expansions planned and realized, PNCA has moved beyond its once-narrow, painting-and-sculpture-centric focus, into a broader interdisciplinary sensibility. There are now three masters degree-granting programs, which have won much acclaim. Design, notably, is more important than ever as a part of the school’s mission. In fact, Dr. Manley often refers to PNCA as a school of art and design, even though the word “design” is not in the school’s moniker.

The school’s heritage and its ambitious present will be celebrated during a months-long program of centennial events, kicking off with a gala black-tie celebration in May, at which the college will present its first-ever “Civic Imagination Award” to beloved former mayor and arts advocate Vera Katz. The galleries that make up the Portland Art Dealers Association will devote the month of October to shows featuring PNCA faculty and students past and present. The college also has plans to offer a major public art commission (details still under wraps) to the city as a gift of thanks for 100 years of partnership. A rich program of other events has also been planned, including a public art walking tour in July, and lectures and symposia running from September through December. One of these symposia will explore arts education’s role in developing creativity in children. Another will survey the role of women in the arts as that role has evolved in the past hundred years.

The centennial celebration, according to communications director Becca Biggs, “is not about looking inward, but outward, at how Portland and the college grew together, sharing the same DNA.” The partnership between the city and the school, Biggs says, was founded on “equal parts collaborative effort, creative practice, and civic imagination.”

One of the celebration’s central elements will be the Portland Art Museum’s sprawling exhibition, “PNCA at 100,” which will run from June 6 to September 13. The survey, featuring more than 30 artists, is organized by the museum’s chief curator, Bruce Guenther, and will take museum-goers through the college’s history decade by decade. In addition to historical artists such as Bunce, regionalist landscape painters Henry Frederick Wentz and William Givler, and painter and longtime PNCA instructor Michele Russo—perhaps best known for his evocative, Matisse-like female nudes—the exhibition will also spotlight living artists who have been active across a wide span of media and 20th and 21st Century art movements. Spanish-born Manuel Izquierdo has been creating sinuous semi-abstract sculpture and woodcuts for more than 60 years now. Lucinda Parker has won acclaim for broadly sweeping gestural abstraction in an earth- and sky-toned palette inspired by frequent hikes through old-growth Oregon forests. Judy Cooke mixes diverse media together—aluminum, wood, found paper, masking tape—and blurs distinctions between sculpture, painting, and collage. Exhibit curator Guenther hopes the show will afford an inkling of the expressive breadth and depth of PNCA graduates and faculty members past and present.

Guenther holds that while the impact of the school’s seminal early decades cannot be underestimated, the most exciting flowering happened after World War II, when the faculty more than doubled, important artists began teaching there, standing associations with Lewis & Clark College and Reed College began to bear fruit, and the artistic community that the school nurtured became a catalyst for cultural life throughout the region.

“I think one of the most interesting periods,” Guenther says, “is post-World War II into the ’80s. During that time, because of PNCA, there is a core community of people in Portland who define themselves primarily as artists—and at a certain point they look around and say, ‘I need galleries! I need a scene!’ You have Louis Bunce starting a gallery and doing live painting performances to jazz music with Milton Wilson. In the 1960s you have Arlene Schnitzer, who took classes at the Museum School, founding the Fountain Gallery, running it for 25 years, and becoming a major part of Portland’s cultural life. And then, when Fountain starts to wind down, you have Elizabeth Leach, Barbara McLarty’s Image Gallery, the Anne Hughes Gallery, and the Sally Judd Gallery becoming established, and William Jameson coming into the Pearl District before it was called the Pearl District. So throughout this period the Museum School, which became PNCA, was a kind of seed bed out of which important things spun.”

In the jazz-like spirit of experimentation and innovation that Guenther credits PNCA with fostering, “PNCA at 100” will also incorporate performative elements, with groups of artists doing live drawings to musical accompaniment. Also, in future-forward mode, the exhibition’s catalogue will be an online publication, including essays, interactive elements, a detailed chronology, and hyperlinks to artists’ work. Guenther reports that this “is the first time we’ll be doing such an intensive experience on the Web. We think it will be a fluid and more lasting way to do it, and will add up to a much denser experience than the physical exhibition, which is constrained by time and space and budget. With the Web, people can either dip a toe in or plunge in full force.”

As PNCA eyes its next hundred years, the specter of the current economic recession casts an ominous shadow. Still, Manley believes it’s important to balance “a sense of fiscal judiciousness” with the college’s long-term vision. “Going forward into our next century, I think we have an opportunity to apply imagination, creativity, and resourcefulness—the things that have always been parts of the equation in Portland and in Oregon ... We want to live up to the legacy of our founders in terms of growing, rising to new levels of excellence, and serving the larger community—in ways that distinctively and productively show Portland and the Pacific Northwest to the world.”