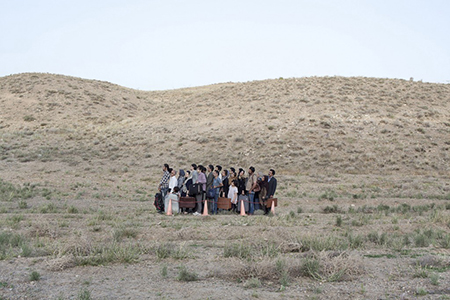 In “Burnt Generation: Contemporary Iranian Photography” many of the works by nine Iranian photographers — Azadeh Akhlaghi, Gohar Dashti, Shadi Ghadirian, Babak Kazemi, Abbas Kowsari, Ali Nadjian and Ramyar Manouchehrzadeh, Newsha Tavakolian and Sadegh Tirafkan — are being shown in the United States for the first time. The term “Burnt Generation” is attributed to Iranians born between 1963 and 1980, and these now middle-aged artists provide glimpses into the contemporary daily lives of Iranian citizens in their home country. This is a rather solemn exhibition overall, and it’s also rich with revelatory content.

Newsha Tavakolian’s portraits are a particular standout. In her series, “Look,” the young tenants of the apartment building in which the artist lives pose in front of the windows of their homes. Some gaze into the lens with teary eyes, or forlornly into space with their arms wrapped around their knees. Others sit at tables strewn with the remnants of a solitary meal, or in the midst of their toiletries. Each man or woman is alone, bathed in the twilight that washes in from the large windows. Each photograph was taken at 8:00pm, and that light is particularly symbolic. In Tavakolian’s pieces, the exhaustion, worry and dread of the young subjects’ expressions are underscored by the suggestion that the world outside their windows might continue to darken before it’s light again.

Both Tavakolian and collaborative photographers Ali Nadjian and Ramyar Manouchehrzadeh use their work to highlight the effects that Iran’s restrictive theocracy has on the individual. Ali and Ramyar also photograph their subjects in the home, making even clearer the distinction between the lives that Iranians live in the domestic space and what they must do to align with the regulations of the public space. A photo in the artists’ series “We Live in a Paradoxical Society” depicts a woman entering her home as she brings back her groceries. The left-hand side of the scene is what signals to viewers that the subjects live in a Muslim state: the woman’s head and body are completely clothed and covered as she reenters from the outside. In the right-hand side of the scene, the woman’s T-shirt-clad husband reclines on the couch in a vignette that otherwise looks like any number of other places in the world.

Gohar Dashti, too, chooses to capture Iranians in a variety of scenarios that are widely relatable: waiting in line with luggage, clamoring upon a playground slide, dancing in a crowd. The subjects are packed closely together, their physical unity underscored by the fact that each group is photographed in the desert — a lonely cluster of people within a vast, empty landscape. Dashti, and her fellow artists in “Burnt Generation,” illustrate the feelings of isolation that accompany a seemingly homogenous society. The show sheds light on the lives lived by individuals within it. This is a picture of Iran so different from what corporate media channels depict, and the understanding and empathy that it instills make us question the kinds of strictures, rhetoric and prejudices that keep us from knowing even basic things about our fellow human beings.