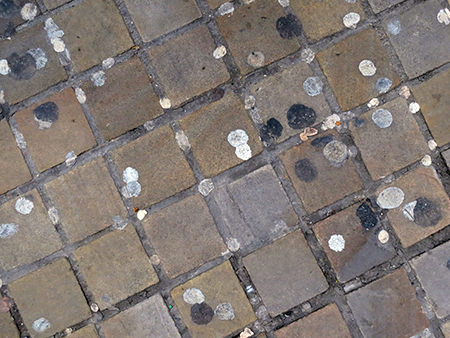 Christian Marclay continues his mind-bogglingly intense and methodical process of streaming together thousands of images to create “Six New Animations." These new works feature shots taken on walks through London, where he resides, of objects on the ground. Each video features images of the same category of object, each of which, as they are here, are commonly found as garbage: plastic to-go beverage lids, gum wads on concrete, cotton swabs (aka, Q-tips), plastic bottle tops, cigarettes, and straws.

From one video to another, arrangement of the object from shot to shot gives the appearance of various movements. The cigarette grows and shrinks; the straws, bent at various angles, give the appearance of dancing; and the cotton swabs rotate and jiggle. But it is the gum, crusty, smashed flat, faded, dried out wads on gray sidewalks, that steal the show. They appear cellular, dividing and uniting, organically moving across and around the screen. It’s biological; it’s rhythmic; it’s really beautiful. And while these chewed up and spit out splats of goopy candy may be the highlight, every one of these works is a complete success. Marclay makes garbage beautiful every time; he makes it boogie and shows its interesting variety: colors, angles, landing spot. And further, the takeaway in every case is completely mesmerizing, at once an attack on (it’s chaotic) and calming of (it’s hypnotic) one’s visual sense.