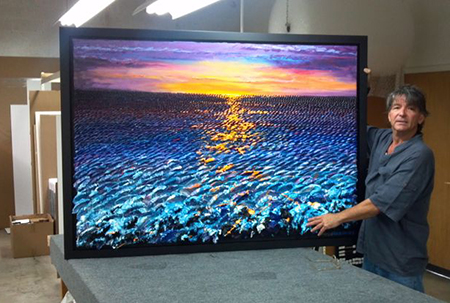 Francis Mesaros with one of his patented Kona Hawaii Pancture® Paintings

What constitutes artistic credibility? In the most rarefied echelons of contemporary art, the criteria are pretty narrow. They tend to involve an MFA from Pratt, Parsons, Yale or a handful of other art schools; a studio in New York, Berlin, London, perhaps L.A.; a spot among the stables of Larry Gagosian, David Zwirner, Mary Boone or their general ilk; shows in the right museums; commissions by the right collectors; reviews in the right magazines; a splashy presence at the major fairs; and ever-escalating sales at Sothebys and Christies. It's a recipe for a decidedly homogeneous soup, which most aspiring artists hunger for but few have the luck and resources to cook, much less eat. But there is a different breed of aesthetic entrepreneur who chases fame and fortune through means unbeholden to traditional pedigrees, but rather to tactics and standards borrowed from the business world. One such artist is Francis Mesaros.

I learned about Mesaros on an airplane last December. Someone on a previous flight had left in my seat pocket a copy of The Robb Report, a magazine catering to the kind of aspirational male readership that purchases, or at least daydreams of, big yachts, Swiss watches, sports cars, and the leggy, stilettoed blondes who magically appear if one retains a "results-oriented executive dating service." The magazine contained an advertorial about Mesaros, a Florida-based artist who paints semi-abstracted seascapes and beach scenes.

The verbiage in the copy, it is safe to say, was not targeting ARTFORUM subscribers. It touted Mesaros' paintings as "definitive investment art" created via "a pioneering art technique using a fusion of sculpture and painting" called "Pancture®." This revolutionary technique, reputedly protected by a U.S. patent, is detailed on the artist's website, www.mesarosart.com, which shows him applying thick wedges of impasto with a palette knife. Each wedge depicts an ocean wave welling or cresting, full of froth and bathed in the light of extravagant sunrises or sunsets. The effect is conspicuously textural, nifty if you're into that sort of thing, but of questionable novelty, given the extremes to which Impressionist and Modernist painters have pushed surface for more than a century. (Jay DeFeo's "The Rose," anyone?) A lay reader of The Robb Report, however, would be apt to assume that conspicuous impasto was a wheel invented by Mesaros alone.

"Some of the wealthiest collectors," the copy continues, "are already clamoring for his work." We're told not one but two Panctures® were acquired by Guy LaLiberté, founder of Cirque du Soleil, while a different painting, "completed for exhibit at Wynn Las Vegas," weighed in at 220 pounds. ("The Rose," for the record, exceeded a ton.) Further, a collector who owns a Pennsylvania wall-and-roofing contracting company has two paintings "valued at $42,000 each." The would-be movers and shakers name-dropped in the article, we are rather confusingly informed, are excerpted "from a confidential client list," which must not be that confidential. Mesaros is promoted by "the publicity firm working with Bruce Springsteen, Paul Simon and other A-list artists." No need for a mere art dealer when one can hire a P.R. firm whose boss reports to The Boss. Maybe the purple prose on the artist's website is an indication of how music promotors position an oil painter's wares: "[The seascapes] beg us to frolic naked at twilight — or better yet, midnight — towards the water that beckons you to bare your trembling soul as Mesaros does his." Are we hot under the collar yet?

Amusing as the Mesaros article is, my point is not to impugn it, but simply to point out the multiplicity of approaches artists take in cultivating collectors. In our high-art myopia we forget that not all collectors make purchases because the artist won the Turner Prize, was featured at Documenta, or was hailed the toast of the Venice Biennale. Plenty of well-heeled, well-meaning people have never heard of Kehinde Wiley or Beatriz Milhazes but nevertheless have strong, idiosyncratic preferences. They're not interested in what Benjamin Buchloh writes, and they'd rather sit playing a peg game at The Cracker Barrel than sit across a table getting stared down by Marina Abramović. I have no problem with such collectors. Anybody who responds to art with passion and a pocketbook is making a stand for personal taste — conceptualism, French post-structuralism and post-post-irony be damned. The art world should be wide, pluralistic, and inclusive enough to accommodate all comers. There's room at the inn for everyone — even people who buy paintings by the pound.