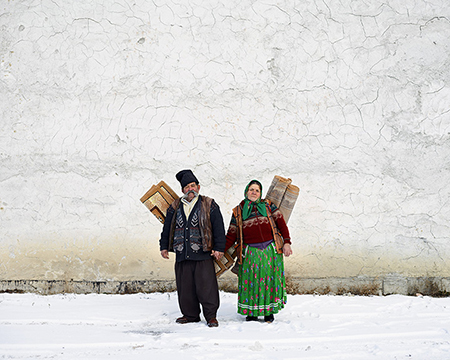 For the past several years, Hungarian photographer Tamas Dezso has been documenting the changing social and physical landscape of post–Soviet era Hungary and neighboring Romania, particularly of life on the edges of society. “Notes for an Epilogue” is an ongoing series of the latter. Notable is that Dezso tackles multiple approaches in this series: painterly landscapes; photo documentary; portraiture; abstracted, formally complex images; narrative scenes.

The series as a whole makes clear that these environments are frigid and the conditions harsh. People are bundled up, skies are grey, trees are bare, snow and frost is aplenty. But even in all this bleakness, Dezso finds beauty, capturing a touch of the romantic. For instance, "Forest with Mistletoe (near Oradea)" shows a birch forest (hosting mistletoe) on a winter’s day. The image shows just a slice of the ground and the treetops are cropped, forming a square of seemingly eternal vertical grey trunks topped with twiggy branches reaching into a murky sky. The image is mesmerizing in its repetition and subtle palette, giving it a fairytale-like quality.

Particularly arresting are Dezso’s images of people. "Carpet Sellers (Pojorata)” centers on an older couple, stout and dressed in layers of various patterns and colors. They stand on snowy ground in front of a large wall with a white, cracked surface. Holding hands and carrying their wares on their back, they are frozen in mid-walk as they go about the business day. The ground is green but the sky still grey in "Ileana (Fata Rosie, Batrana)." Here, an older woman stands front and center, dressed to stave off a chill, holding handfuls of apples; the background is blurry. Again, the subject is captured in the midst of an action, this time gathering fruit. These images then are both portraits and genre scenes that depict the everyday activities of the people the artist encountered. The variety of slice of life, observational and emotional scenes depicted demonstrate Dezso’s efforts to understand and process the world he is investigating. While close to it, this is not his homeland. He is a curious observer, creating a nuanced whole by viewing through his lens from a number of perspectives.