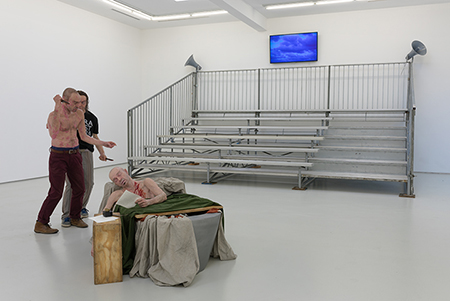 Daniel Joseph Martinez, "IF YOU DRINK HEMLOCK, I SHALL DRINK IT WITH YOU or A BEAUTIFUL DEATH; player to player, pimp to pimp," 2016, installation, dimensions variable

Daniel Joseph Martinez’ installation, with its lengthy title "IF YOU DRINK HEMLOCK, I SHALL DRINK IT WITH YOU or A BEAUTIFUL DEATH; player to player, pimp to pimp. (As performed by the inmates of the Asylum of Charenton under the direction of the Marquis de Sade),” is based on and inspired by Jacques-Louis David's classic painting "The Death of Marat.” It may not be a tour de force, but there are aspects of it that deserve acclaim. Three central tableau figures — all hyper-realistic, symbolic iterations of Martinez in different guises — haunt the center of the gallery, with aluminum bleachers framing the scene like some surreal public murder. Martinez himself wearing a black 'Zarathustra' t-shirt, has his hand on the shoulder of Martinez #2 — based on Marat's assassin Charlotte Corday — who wields a knife in ready-to-stab position. Martinez #3 represents Marat himself, sitting in his bath of blood.

Moving amidst this scene as a viewer is creepy indeed, the scale is so human you sense that Martinez #1 might turn and stab you. It's not unlike a wax museum-meets-interactive-haunted-house experience, with the bleachers embedding you more deeply into the action. But the combination of symbol plus the verisimilitude of these figures grabs our attention, if to a point of revulsion. Martinez as Corday is covered in sores; the historical Marat suffered from During’s disease, a skin condition. The effect is so successful as to overshadow the weaker elements of the installation. Martinez' voice softly intoning didactic proclamations out of surrounding speakers can barely be heard, and perhaps it's not really meant to be. The messages, trenchant as we have come to expect in the context of Martinez’s heavily political oeuvre, ultimately are subsumed by the spectacle.