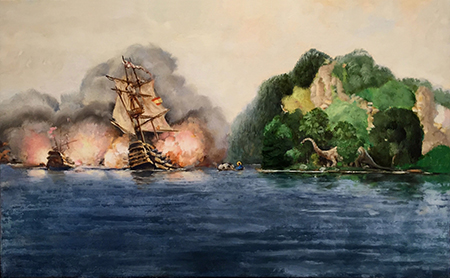 “History, with all her volumes vast/hath but one page,” read Thomas Cole’s 1830’s newspaper advertisement for his series of paintings titled “The Course of Empire.” The Hudson River School founder was quoting “Childe Harold’s Pilgrimage” by Lord Byron, an early 19th-century narrative poem that struck a chord with European audiences disillusioned by the violent power struggles of the Napoleonic era. In Cole’s famous set of five allegorical paintings, executed between 1833 and 1836, he chronicles the rise and fall of an imaginary city. It’s a decadent and tumultuous cycle that is bookended by natural serenity. I’d like to imagine that Cole considered the dark humor of taking out a newspaper ad for this particular body of work. Here was an epic argument for the virtues of pastoralism, printed on trees sacrificed for the purpose of mass communication. Of course, the ink and pulp of Cole’s ad has long since reabsorbed into the earth, just as the marble columns in the final painting of his series are crumbling to dust.

In Scott Greene’s current show “The Rise of Empire,” the Albuquerque painter depicts waste that is not quite as biodegradable and processes that are vast and irreversible. Greene is a skilled oil painter, and he successfully evokes the lush surfaces and inner glow of Hudson River masterpieces, if not their finer details. The five canvases that anchor the show chart a global allegory that leaps and bounds through history, sometimes in the span of a single canvas. In “Peace Offering" frigates fire broadsides at an island populated by dinosaurs. “Manifest" shows a runaway locomotive uprooting a tree full of lynched corpses. “Testing One Two" references the Manhattan Project, as does “Eminent Domain" the September 11th attacks. “Shelf Life” depicts a felled cell tower beside a pocked glacier. While Cole tells a universal story within a fictional metropolis, Greene conjures postmodern humor by dropping wide-ranging historical events into Cole’s template. If history is but a page, these paintings suggest that our era could be its final, faded photocopy.