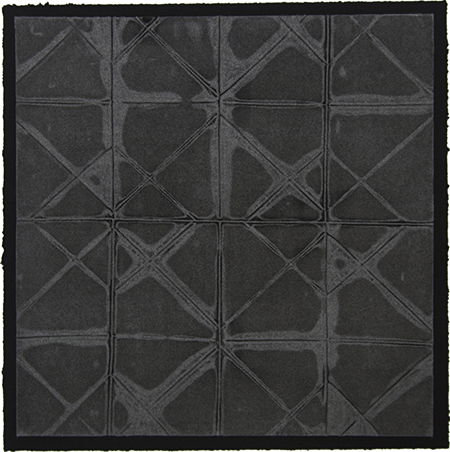 In “Mass,” Jenene Nagy couches a conceptual premise — the fluid relationship between the second and third dimensions — in a disarmingly poetic celebration of place. Inspired by the desert landscape on the outskirts of Southern California’s Coachella Valley, where she has lived since 2014, Nagy has married the minimalism of another desert-lover, the late Agnes Martin, with a brazenly maximalist technique. In graphite drawings such as the scroll-like “Older than the host 1,” she covers the picture plane completely in small, obsessive lines, which from afar appear monolithically black but betray their intricacy when you get up close. The drawings, folded then unfolded to impart diamond-shaped creases, indirectly reference Native Southwestern in their refined geometry.

On the gallery’s east wall, a ten-foot-square digital photograph, taken in Nagy’s backyard, contextualizes the works amidst a vista of rocks and palm trees glittering in the light of dusk. Perhaps the show’s strongest piece is the sly “Field 2,” in which a square graphite drawing is mounted asymmetrically on archival linen and framed in polished metal. Mixing austerity with flash, it embodies a certain SoCal sleaze-chic endemic to The Standard Hotel and American Apparel ads:  simple, sexy, and, with its fetishistic mixing of surfaces, just a little bit perverse.