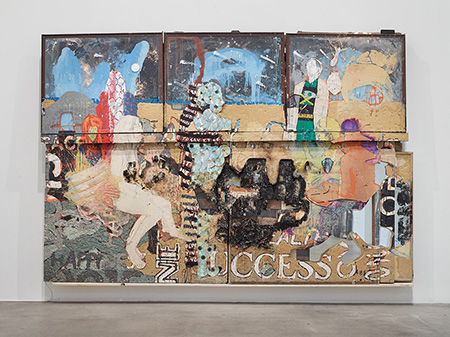 Aaron Fowler is a young African American artist who, since receiving his MFA from Yale in 2014, is being recognized as an up and comer. He received a 2015 Rema Hort Mann Foundation Emerging Artist Grant and was awarded a residency at the Studio Museum in Harlem. The large-scale assemblages of "Blessings on Blessings" are based on the lyrics from a 2015 song by rapper Big Sean.

The quasi-narrative works collage painted elements with iconic objects from popular culture like sneakers, CDs and printed ephemera. Fowler uses folding tables as well as wooden palettes as sculptural surfaces on which he builds his creations. The works are densely layered as Fowler uses everything at his disposal. Cigar packages are used to create the figurative elements that populate these works. These ambitious assemblages have a kinship with other noted African American artists — David Hammons, William Pope L. and Kerry James Marshall come to mind. Fowler's work asserts a confident and purposeful funkiness as he explores personal and universal themes referring to race and culture.