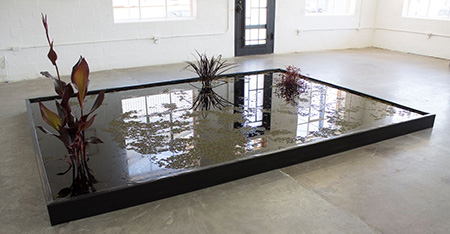 Swedish born visual artist Oscar Berglund lives and works in Mexico City; this is his first solo show in the United States. In this multimedia exhibition — including photography, works on canvas, video and installation — the artist investigates cycles of development and decay within the modern metropolis and how this polarity reveals meaning and awareness about life cycles. One example is his "Untitled (Stained)" series of abstract picture cycles of erosion and weather patterns. Through a process of treating the surface of the canvas and exposing it to the elements, an accumulation of lines and splotches appear, a form of frottage, that are time based and process oriented.  Berglund then seals the surface, which stops the process and locks it in place like a scientific specimen. These symbolic records form without intervention by the artist, save initiating the exposure. They are all-over abstractions without a trace of the artist’s gesture.

As a contrast, in the "Untitled (Gradient)" series his process appears to yield just the opposite. He treats the canvas to the same conditions but rather than seal the evidence of erosion and decay with a fixer, he paints over the surface with a subtle shade, ranging from white to gray, that gives each one a slightly different hue, forming strict monochromes. Since the surface is unfixed, the process continues beneath the paint. The canvases are in this sense alive, so that the surface formations will continue to evolve over time. This undermines the otherwise completely blank surface. Both series engage with the metaphorical register in competing ways that still manage to get the point across. Resting in the center of the gallery space is "Somewhere In Between," a large pond of water that represents another rumination on systems of decay. Live water flora populate the pond and remind us that civilizations experience never-ending cycles of construction and decay. It’s a fitting expression of Nietzsche’s notion of eternal recurrence.