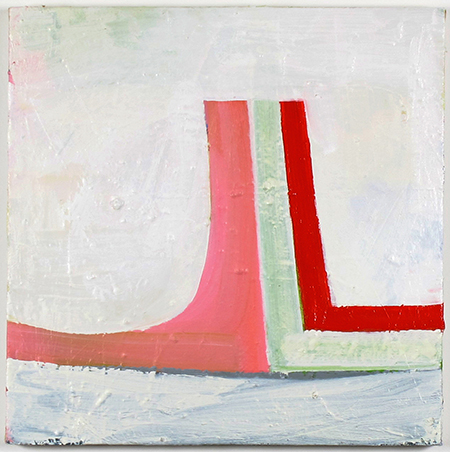 David Aylsworth works and reworks his canvases, building up layer upon layer of oil. He sets up a series of canvases and moves among them, loosely applying color with gestural brushstrokes. When some combination of lines, shapes, and colors catches his fancy, he turns his focus to that canvas and begins to develop it until he is happy with the result. Aylsworth’s vocabulary of shapes varies widely; sometimes they are angular and pointy, sometimes curved and wavelike. His abstract compositions may suggest a landscape, a seascape, or an aerial view of a twisting road, as in “Beautiful in Yellow, Black and Green.” “Which Where What Who” seems to depict a snow-covered structure, while a storm is brewing in “Soon it’s Gonna Rain.” Usually there is movement in the way the shapes interact and overlap, as in “Strummed Ukeleles,” where two thorn-like red shapes advance from the left to bisect a white field.

Although the artist builds up multiple layers, his extensive use of white and his selection of bright colors keep the paintings light and playful. In “Each Sun to Each Moon,” snow seems to encroach on a green field until it butts up against a body of water. In others, one can perceive figures  — a penguin in “Big Cocoon” and a hooded figure in “Upon His Caterpillar Knee.” A series of right angles (“Clarinets of Every Size”) and curved triangles (“Strummed Ukeleles”) take on an anthropomorphic quality. Aylsworth is inspired by music as well, which is reflected in titles that refer to musical instruments, Broadway shows or jazz. Like music, his paintings are lyrical, full of movement and emotion. The more one studies them, the more intriguing they become. View them long enough, and they become an imaginary world of shapeshifting creatures.