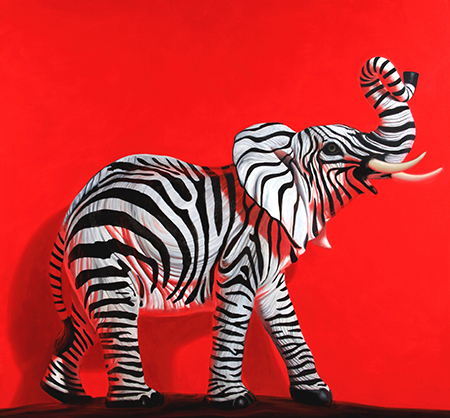 Ron English is well known for questioning the motives and delivery of advertising agencies. From his early street work to his photo realistic paintings, English revels in mashing together symbols and striking color palettes that both attract and repel. This includes obese cartoon characters from sugar cereals like “Fat Tony” (Tony the Tiger) and a baby Hulk sculpture entitled “Temper Tot” that epitomizes a spoiled child. Combining elements of high and lowbrow, English celebrates a new series entitled “Neo-Nature: We are the New They" that utilizes many well known characters and introduces a few new ones.

The quasi-evolutionary theme throughout the exhibit pokes fun at the unusual context of which we live and is heightened through English’s extreme visualizations. A full-grown elephant entitled “Zelephant” wears a zebra's print pattern against an electric red color field. The “Giraffasaurus” poses in front of cartoon panels that doubt our human condition and the world we have made for ourselves. Humans have been modifying animals for decades and English’s mash ups make use of this as a metaphor to cast our supposed advances in a ridiculous light. These characteristics are reinforced in an installation of a Bigfoot family that appears to be walking in the woods, while the father Bigfoot sports a camera around his neck. The supposed natural landscape, which includes us, has been dramatically altered by modern developments — just not necessarily for the better.