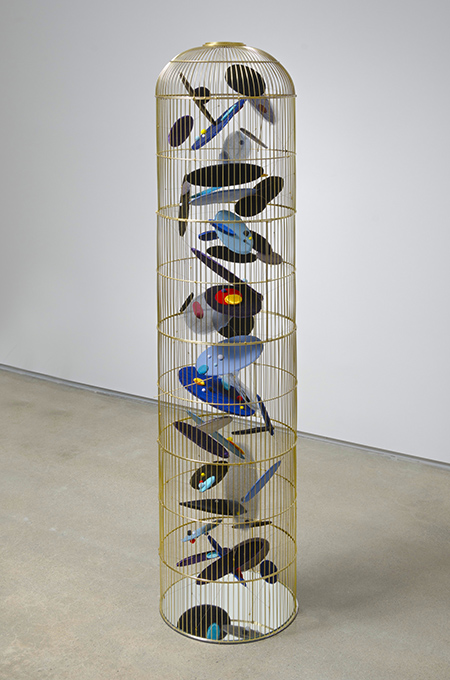 In “More Light Than Heat,” Lynn Aldrich transforms Duchampian readymade materials bought in hardware, craft and office supply stores into constructions that have transcendent and spiritual qualities. The pieces in this show, all completed this year, represent an evolution for the artist, whose sculptural works of the past two decades have tended to possess more whimsical and homespun aspects.

The core of this exhibition is an installation on two walls of the gallery titled “Rosy Future,” approximately 20-feet wide by 13-feet tall. Built from drywall panels, drywall screws and tarpaper, and painted with oil and flashe paint, the work “is inspired by the rose window in the Chartres Cathedral in France,” Aldrich explains. “That window [which she calls ‘the original light and space art form’] looks like galaxies to me.” The installation includes a 6-foot diameter circular cut out and constructed artwork, reminiscent of that Chartres window with its intricate medieval and fleur de lis designs colored in varying shades of magenta. Emerging from this construction is a similarly designed wall painting. Nearby and hanging from the ceiling is “Rose Ghost,” measuring six feet in diameter and made from tulle and transparent plastic, with shapes similar to those in her rose window inspired piece. Aldrich explains that this “ethereal” construction, while dialoguing with the installation below it, “moves” in colors that range from pale gray to light blue to darker blue to black.

The artist’s “The Universe in Captivity” is a 60-inch tall steel wire and brass cage, filled with ellipses that are reminiscent of the galaxies she sees in Chartres. These are made from velvet and craft balls, attached to plastic. This metaphorical piece is inspired by the famous “The Unicorn in Captivity” tapestry at New York City’s museum of medieval art, The Cloisters. And just as that unicorn is constrained within a fence, yet appears content, Aldrich visualizes a stable universe by confining the elliptical galaxies to a cage. “I’m mourning the entropy of the universe,” the artist explains, “and I’m trying to hold onto it by putting it into a cage.”

The 50-inch tall “Velvet Painting: Ascension” is “a sculpture of a painting,” Aldrich says. There is no paint in this piece. Instead, the artist constructed it from wood, added tiny vertical shelves extending through its entire height, and then glued multi-hued velvet and velveteen to the frame, beginning with black at the bottom, ascending through dark blue, purple, red, magenta, orange, yellow and finally to white. By employing a spectrum of colors and going from very dark to very light, the effect is spiritually and aesthetically uplifting.

Two other pieces in this exhibition, made from notebook paper and ink, reference the artist’s earlier, seemingly more mundane works. “Ink Wave,” comprised of a ring binder with extra notebook paper added — to give it the shape of a wave — is dipped into deep blue ink. “Inklings Icon,” anchored by a 3-ring binder with paper dipped into indigo ink, is as much about its name is its appearance. The word, “inklings,” Aldrich explains, “can imply intuition, a partial knowledge and a prayerful connection to God.” With these works, their transcendent quality shines through in the various allusions to a higher consciousness.