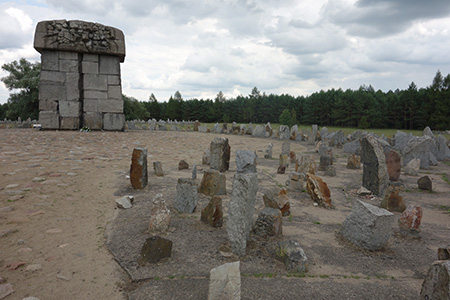 The history of Poland is inextricably linked to the history of the Jews in Poland. Two museums, one in Warsaw the other in Treblinka, symbolize the one-thousand-year journey traveled by Polish Jews which ended with World War II and the Holocaust. With half the six million Jewish deaths of the Holocaust comprised of Polish citizens, the Polish people’s attitudes and official government positions have changed considerably since the Russian soldiers went back to Moscow in 1991 after their 50-year occupation.

As Dr. Barbara Kirshenblatt-Gimblett, a New York University professor and Director of POLIN (The Museum of the History of Polish Jews) who divides her time between New York and Warsaw, put it in an interview, efforts at coming to terms with Polish complicity in the Holocaust are best dealt with through truth, transparency and understanding rather than recrimination, blame and retribution. “Zones of trust,” as she calls them, are set up within the museum to explore each of the ten centuries of the history of Polish Jews. Present through it all when Poland was not Poland (1772-1914) and when many of today’s Poles won’t call another period “Poland,” (1939-1991), Jewish residents had a distinguished lineage that began with 10th-century merchants passing through Poland from Russia and Central Asia. When some came to a clearing, they “heard” a word, “Polin,” which meant “rest here” in Hebrew and decided to stay.

Brilliantly laid out in six state-of-the-art galleries, which opened to the public in 2013, visitors may stroll, pause, continue or engage with interactive videos that include multi-language instant-touch translations of medieval documents, or watch an animated film about the role of Jewish girls in the 17th-century. A full-scale recreation of a 1729 synagogue ceiling and altar, or bimah, in Gwozdziec, Ukraine has dazzling primary colors and gilded columns, the work of over 400 trained volunteers.

Similar to the United States Holocaust Museum in Washington, DC, the exhibits blend artifacts with written information and “sound cones,” all joined by a panoply of temporary exhibitions, scholarly symposia, theatre, film and concert series. However, eschewing the Federal style architecture of the building in DC, POLIN’s four stories are enclosed in a spectacular glass-sheathed structure by Finnish architects Lahdelma & Mahlamäki, selected from an international competition. Before it even opened, POLIN won the Chicago Athenaeum Architectural Award. Set within a park, it is placed halfway between the original “Monument to the Ghetto Heroes” (1948) and Umschlagplatz, the spot where the actual deportations occurred. The entire project was a model of cooperation between the City of Warsaw, the national ministry of culture, and the Jewish Historical Institute of Poland.

Not that far from Warsaw, but far enough not to have been noticeable, the Treblinka extermination camp (1941-43) was where most of Warsaw’s Jews died before, during and after the heroic, but doomed, Warsaw ghetto uprising of 1943. It was also one of the few camps with an uprising of its own (August 22, 1943), which so frightened Heinrich Himmler (numerous soldiers were killed) that he ordered the camp leveled and the 850,000 corpses exhumed and burned in enormous pyres. By November that year, Treblinka was burned to the ground and closed. Gone, but not forgotten. Recently, ground-penetrating radar revealed thousands of corpses still unearthed.

The Museum of Struggle and Martyrdom (1964) in Treblinka is an outdoor state-run museum with multiple literal and symbolic layers. Near Poland’s largest national park where wild bison roam, it is well hidden by forests but close to large railroad interchanges. Trains from many countries could arrive and promptly take the spur to Treblinka. Most victims were dead within two hours of arrival. There was no selection: Treblinka was not a labor camp or concentration camp like Auschwitz; murder was its only purpose.

Designed in collaboration with architect Adam Haupt, sculptors Franciszek Duszenko and Franciszek Strynkiewicz retained the original postwar commemorative walls in Polish, English and Hebrew. Layered over those, they replaced the railroad route with uniform, unattached rails without metal tracks that parallel the visitors’ pathway to the Symbolic Cemetery.

The third layer is the central stone monument (1959-63) in the middle of the Symbolic Cemetery. Shaped like a giant Jewish tombstone, it is a stylistically transitional piece of great significance: half Socialist Realist, half modernist abstraction. Bodies and screaming faces top two tall supports of cut-and-stacked granite boulders. On the exact site of one of the open burial/burning pits, the monument is surrounded by a huge, curving swath of 1,700 upright stones that commemorate the victims with place names of their origin deeply carved into each rock, also symbolic of Jewish tombstones. The overall effect is akin to Richard Serra, Richard Long, and Robert Morris, all rolled into one. This is truly innovative public art, and it helps make the Museum of Struggle and Martyrdom a powerful and unforgettable experience.