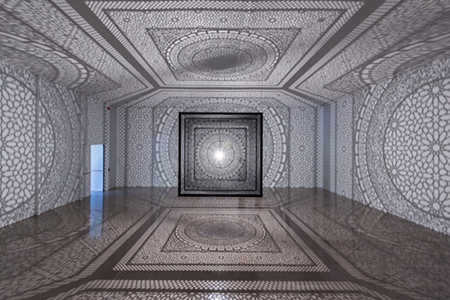 “Intersections” is simple yet brilliant. Anila Quayyum Agha's installation consists of complex shadow patterns cast on the walls, floor, and ceiling of the gallery. A single light source emanating from a suspended laser-cut black box projects intricate designs, creating a magical, mystical environment. The patterns are modeled after arabesque patterns in Islamic sacred spaces so familiar to Agha, who emigrated from Pakistan to the U.S. in 1999. Raised a Muslim, she spent the first few decades of her life restricted to her home in Lahore, as women are unable to move freely about the streets or worship with men at the local mosque. Growing up feeling excluded because of her gender ultimately led to the creation of “Intersections,” a space specifically designed to welcome all people.

The project was inspired partly by the Alhambra in Granada, Spain, which the artist visited on a travel grant in 2011. The Alhambra was built as a fortress in 889 and rebuilt in the 11th century by ruling Muslims before conquering Christians took the city back in 1492. Over the centuries, the palace decayed, but restoration subsequently restored it to its former glory, and the walls and ceiling are again covered with carved Arabic inscriptions, geometric forms and interlacing plant tendrils and vines. Agha envisioned “Intersections” as a place where – like the Alhambra – history, culture, and art can co-exist. The light-ornamented space appears to create feelings of peace and harmony in its seemingly mesmerized visitors.

Agha follows no organized religion, preferring instead to focus on principles of tolerance, compassion, and generosity. Her aesthetic tends to emphasize cultural and social issues affecting women in patriarchal societies. The grant that funded her travel to Spain – from Indiana University for the New Frontiers program – specified that the recipient subsequently develop innovative work and “chart a new trajectory in one’s scholarly, creative or artistic development.” Trained as a fiber artist at University of North Texas, Agha has clearly expanded her creative realm, exploring new territory with spectacular results.