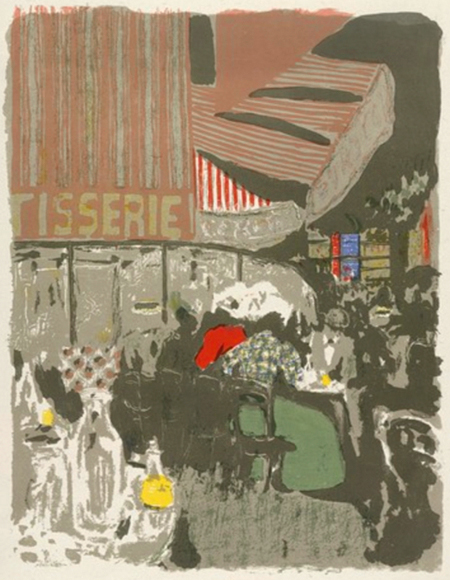 The myth of an anti-bourgeois avant-garde that in Clement Greenberg’s formulation set itself apart (“emigrated”) from both society and the “markets of capitalism” is contradicted by numerous examples of 19th- and 20th-century modernists who were quite at home in upper-class circles and who would have achieved little recognition had they not enjoyed the steady support of their wealthy friends. Few, however, made their charmed milieu the subject matter of their oeuvre. Édouard Vuillard (1868-1940) did. What’s more, Vuillard’s careful observation of bourgeois interiors and denizens (aided after 1897 by the artist’s voluminous photographic records) was integral to his development as a painter of complex spatial arrangements affirming the flatness of the pictorial surface. In Vuillard’s paintings, and perhaps even more so in his prints, this tension is responsible for the peculiar fusion of naturalism and abstraction (or realism and symbolism) that is characteristic of his work.

Brettell says of Vuillard that “what he evidently wanted was less to be a modern artist than to preserve modern life, a particular form of modern urban life — class rise and cultural assimilation.” He further notes that many of Vuillard’s sitters and collectors were assimilated Parisian Jews who had achieved success through their own efforts and connections rather than through inheritance or marriage. The artist, whose own beginnings were modest, felt a natural affinity for these people.

Because Vuillard remained faithful to observation and was, therefore, disinclined to participate in that mystical quest for the ground-zero of painting that propelled others toward pure abstraction, the standard narratives of modernism have cast only a side-long glance at his work. His formal vocabulary remained, to the end of his life, rooted in fin-de-siècle Post Impressionism. But as Richard R. Brettell observes in a perspicacious essay on the parallels between Vuillard’s take on high society and that of his literary contemporary Marcel Proust, one of the things that made Vuillard modern was his “belief in art as aesthetic recovery and preservation.” The artist’s attachment to his mother, a figure that he never tired of painting, was likely foundational to this project, as well as to his determination that his art remain anchored in the transcription of familial existence.

This exhibition at the Simon, which owns a number of Vuillard’s small paintings and the recently cleaned "First Fruits" (which at 14 feet across is the largest that Vuillard ever painted), focuses on an album of 13 lithographs the artist issued in 1899. Titled "Landscapes and Interiors," the original edition of 100 sets was a commercial flop. Subsequently, many of the sets were broken up. The intact set owned by the Simon is a rarity. "Landscapes and Interiors" encompasses views of an outdoor café, eight domestic settings, a receding avenue, and figures traversing a field.

These 16-by-13 inch prints reveal how far Vuillard was willing to go in the direction of abstraction. Abutting objects and figures seen in silhouette fuse into floating flat shapes. Light falling on surfaces is rendered as an erasure that cuts into planes of solid color or sets off their hard edges. Wallpaper, awnings, dress fabric and table covers are flattened and assembled into collage-like compositions that look forward to synthetic cubism. The one true landscape, "Across the Fields," is an accretion of tachist marks divided into horizontal layers. And yet, the mood and the sensibility in which these images are steeped remains that of the belle epoque. Unlike Matisse, Vuillard was never willing to completely suppress in his pictures the modeling and observation-grounded specificity that contribute to what later modernists would decry as “illusionism.” Hence his compositions remain caught up in the conventions derived from Symbolist theater, with which Vuillard was intimately acquainted, having spent years toiling as scenarist and program designer for Lugné-Poe’s Théâtre de l'Oeuvre. In these theater programs, as John Russell has observed, “play after play is announced by a shadowy group of human beings barely distinguished from their environment,” a device that carries over into the 1897 lithographs.

Comparing Vuillard with Matisse is instructive. Of the two, Matisse was without a doubt the more resolute modernist and the one whose unceasing formal invention retains the power to dazzle. Vuillard’s virtue was his fidelity to his social and familial environment. It was a fidelity that kept him tethered to a historical moment and the particular atmosphere and subjectivity that defined it. His formal scope was narrower, his ambition more modest. The pleasure one gets from his work — a pleasure the lithographs at the Simon deliver in extended-release form rather than as a jolt — is inevitably tinged with a sense of loss. As Hilton Kramer wrote, “The career of Édouard Vuillard evokes for us today a world almost as remote from the tensions and pressures of contemporary life as the world of Fragonard. It is a world in which the cultivated bourgeoisie is still secure in its privileges and taste — a world in which art, money, comfort, talent, and new ideas exist in an untroubled harmony, a world insulated from catastrophe.” That once-cultivated bourgeoisie degenerated over the course of the succeeding century into the rapacious and coarse-minded oligarchy with which we are more closely acquainted. Vuillard reminds us of the charm and, most importantly, the delicacy that art could embody when there was still a moneyed audience that could appreciate these qualities.