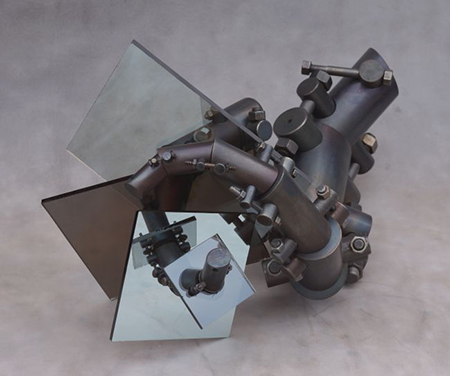 I was in Paris the morning after the 2008 Tour de France ended, and there were still bleachers and bits of scaffolding shipwrecked on the streets. A spindly camera crane, tipped on its side and partly collapsed, conjured a sensation of vertigo among busy facades and massive marble figures. It had something to do with the way my brain extrapolated backwards to the gut-wrenching tipping point of an imaginary accident. Jamie Hamilton is a sculptor and aerialist, and though most of the artworks in his exhibition "The Incompleteness Theorem" sit on pedestals, they possess the same dizzying, dark magic.

Hamilton has spent the past three years building monumental land art pieces that are razor thin stages for his aerial performances. His mixed media sculptures manipulate a similar array of natural forces, albeit on a smaller scale. Neodymium magnets twist rubber, mirrors distort steel and lines seem to spiral around myriad centers of gravity. A book of photographs showing Hamilton balancing atop his lofty installations confirms my fear: should there ever be an accident, the wreckage would look much like the earthbound tangles of wire and steel on display here. It’s an aerialist’s burden to ponder such tragic possibilities, but danger is also his most mesmerizing tool. The show’s title is a reference to Kurt Gödel’s theorems that point out a startling gap in our ability to prove consistent truths in mathematical theorems. Life is full of terrifying uncertainty, no matter how much we try to ignore it. Thus Hamilton holds our attention, imbuing the unpredictable with a breathtaking allure.