Darn, Trump Beat Me To It
Editors’ Roundtable
Column by Bill Lasarow 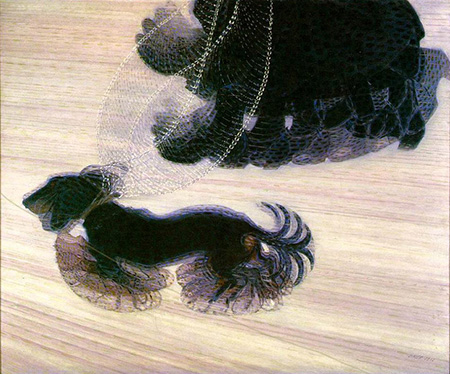 Ben Railton, an English Studies professor at Fitchburg State University in God-knows-where, Massachusetts, pegged Donald Trump a performance artist. He is hardly alone among commentators calling out Trump for what he is, and they are not limited to academia. They range from KCRW’s art critic Edward Goldman to  theater critic Patrick Pacheco, to, for heaven’s sake, conservative pundits George Will and Kevin D. Williamson. Pacheco drew a very convincing comparison to Barry Humphries’ hilariously nasty Dame Edna Everage and the emblematic significance of their respective hair styles. For my money, “Dynamism of a Dog on a Leash” by Italian Futurist Giacomo Balla, painted a century ago, beautifully articulates Trump’s own obsession with motion and speed — while going absolutely nowhere. There is the ominous historical reminder that this idealistic impulse was followed a decade later by the rise of Mussolini; Balla and fellow Futurists were thrilled. The former Socialist Mussolini lead his National Fascist Party to electoral victory in 1922, then as “the leader” formalized, some three years later, what the people really wanted. Just saying.

The performance artist has effectively gotten his hair and hate speech plastered so widely in our feckless media that the corporate elites are starting to hedge their bets. Not so much the conservative establishment, which already can visualize itself drowning in a neo-Birch Society tsunami. The conservative bastion National Review's columnist Williamson reminds us that, “showmanship isn’t statesmanship.” Despite the fact that Williamson is obviously correct in principle, about a quarter of the Republican party’s natural constituency is shouting him down. That 2,000 mile long wall along the Mexican border is a perverse Trump Tower, a brilliantly ironic poke at the ridiculous fantasy of absolute security and purity that millions of not-so-very-Americans pine for. As their fearless leader is so fond of pointing out about those who are not nice to him, how dumb can they be not to notice how many other ways illegal aliens from Mexico or wherever those little brown people with their cantaloupes stream in from will go over and around our new tourist attraction? But now that it’s out there and being tentatively embraced by so-called mainstream candidates, Trump has no alternative but to run with this idiotic solution to a non-existent problem and see how far it goes. Perhaps it gets built and becomes the first wall since China’s Great one to be visible from space; or, like Richard Serra’s much smaller “Tilted Arc,” which caused some pedestrians a similar inconvenience in New York, it simply disappears by court order.

As George Wallace-extreme as is the bulk of the rank and file enamored with Trump's “honesty” (puh-leeze!), the man is a delightfully “counterfeit Republican” (Will’s description): The Republican party takes him seriously at its peril, and that peril has arrived. How sweet that irony is: this is a creature of their own carefully nurtured making. Republicans are so fond of pretending that the second person plural is an all-inclusive term. They cheapen “We the People” to “Our particular group of people, and since no one else counts, therefore we are all of the people.” The leaders don’t really mean it — their purpose is to win elections so they can control the money — but their long exploited constituencies missed the joke. Their rank and file has been angry but stuck for some time. Enter Trump, his hair, and that nauseating mouth that, when he talks, extends out from his face like that giant sucking thing that some Texas oilman talked about 20 years ago. That sucker mouth is a giant lamprey, and so many of us just feel it sucking some of the life blood out of our Republic, proudly engorging itself.

So here’s the thing, for years I’ve been toying with the idea of running for some public office in the guise of a performance artist. A pair of local artists took that on years ago (Sue Daikin and Lowell Darling; not to mention the comedian Pat Paulsen and other mainstream performers mostly looking for laughs and a bigger payday), and both left me with the certainty that a key element was missing. It was clear that they never intended to receive actual votes, so were never really seen as candidates. It undermined their critique of the process, a certain frisson was lacking. I wanted to recast the process in a manner more befitting of the Founders in order to demonstrate how wide is the chasm between the idea and reality of America, but that we were getting closer and could get closer still.

But, darn it, Trump’s tour de force makes this impossible by making my very point, if for all the wrong reasons and in completely the opposite direction. Still, it’s obvious that I would henceforth be rightly cast as a pale imitation of the real thing. I figure I've got better things to do with my time, and we are probably learning more about who we are by doing it his way in any case.

For me, square one was to be pointing out just how successful America has been — but that we will do even better by skeptically and aesthetically embracing our civic process. Trump starts out every speech by telling us that we suck, that we are a bunch of losers, but that Trump has arrived — at last! — to deliver us from collective incompetence. Leave it to him and a few of his friends, things will be great. All we need to do is stand aside, watch and permit him to do his thing. Whatever that is, it will be easy.

How many ways has that trash been packaged?

The outcasts, the poor, Emma Lazarus’ “wretched refuse" have been historically drawn to America with good reason, and once in their new home become contributing, frequently successful Americans, constantly proving the difference maker that is liberty and the freedom to be who you are and to make your own choices. Instead of producing passion for our present if mitigated greatness that we continue to see evolve as new immigrants join our inclusive society, the demagogue Trump arouses fervor for making us into an exclusive, members-only club, non-members to be consigned to something resembling his vision of Mexico. That restive cult of supporters today would be his willing victims tomorrow, a mass commodity fit to serve the profit margin of his insatiable narcissism. Trump's is a performance art that leads us not to the shining city on a hill but something more closely resembling Westeros.