The Artist as Charity
Editors’ Roundtable
Column by Richard Speer 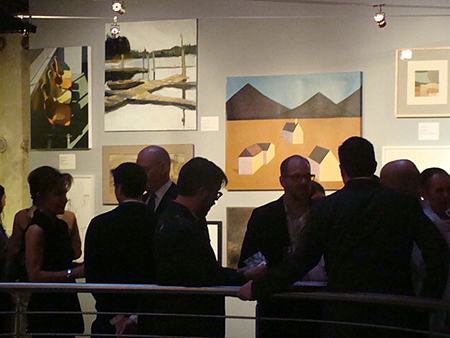 On July 22, jet-setters including Sylvester Stallone, Orlando Bloom, Naomi Campbell, and Heidi Klum — along with hundreds of rich people who aren’t movie stars or supermodels — descended on the Leonardo DiCaprio Foundation’s art auction in St. Tropez, France. By night’s end, attendees had parted with $40-million worth of artworks by some of the biggest names in the canon: Monet, Rodin, Warhol, Lichtenstein, Stella, and Murakami, for starters. Proceeds benefited the foundation’s efforts combatting global warming and protecting forests, coral reefs, and endangered animals such as mountain gorillas and black rhinos. It’s hard to argue with protecting a rhinoceros. And it’s hard to fault environmentally conscious philanthropists for supporting a worthy cause while increasing visibility for artists and their work — right? The question arises: In circles less rarefied than the aeries of international glitterati, do charity art auctions really help artists? In my experience, they don’t.

Sure, many artists donate simply because they wish to support an organization’s mission. But most are also hoping for exposure that will lead to future sales. In theory, it’s a win-win-win proposition for artist, collector, and nonprofit. All too often, though, bidders at charity art auctions are there not for the art, but for the charity — and the vanity: for the prestige of making a visible economic gesture in the presence of friends and colleagues and networking while sipping cocktails, peacocking in the brightly colored bow ties and slit-up-to-here cocktail dresses that constitute “festive formal attire.” I have encountered winning bidders who bragged of having no knowledge of, nor interest in, contemporary art. For some, feelings of noblesse oblige are tinged with the suspicion that, while businesspeople earn their daily bread through hard work and risk-taking, artists get to “play” for a living, romping through poppy fields of creativity and self-expression. For such philanthropists, shelling out several thousand dollars for an artwork is permissible only if the money buttresses a cause larger and nobler than the livelihood of an artist.

I also routinely encounter nominal collectors who buy art only at charity auctions, where they know they’re likely to get work more cheaply than at the artist’s gallery. At auctions, bidding often starts — and ends — well below galleries’ retail prices, where artists actually receive their fair share of the proceeds. Here in Portland, the Cascade AIDS Project (CAP) Art Auction has been a highlight of the city’s social calendar for the past 26 years. I’ve covered it as a journalist for the last 13 years and was a little shocked recently when two veteran regional gallerists told me that over the course of the auction’s long history, their galleries have yet to make a single sale as a result of their artists donating work. Not once, the gallerists maintained, has a collector approached them and said: “I loved seeing so-and-so’s work in the auction ... Do you have other work of theirs I can purchase?” Alas, any artists hoping that by forfeiting their profits they’ll attract such a collector, may as well be hunting unicorns.

It should be noted that unlike CAP, not all of our regional organizations take the entirety of the hammer price. Oregon College of Art and Craft’s annual “Art on the Vine” auction allows artists the option to keep 40-percent. Disjecta Contemporary Art Center’s annual auction extends artists the option of 20–percent. By contrast, galleries generally split sales 50/50, which for most artists is hard enough to make a living from. This gets us to an uncomfortable truth: The bank account of the average artist is, in itself, a charity case. While nobody promised any artist a rose garden, the fact remains that the vast majority of those quixotic enough to dedicate their lives to plumbing and transliterating the soul’s depths, are consigned to a cycle of day-jobs, maxed-out credit cards, and the help of family and friends. But artists do it anyway, and the culture grows richer for it. Now that’s a worthy cause — and one worth remembering the next time you reach for your paddle.