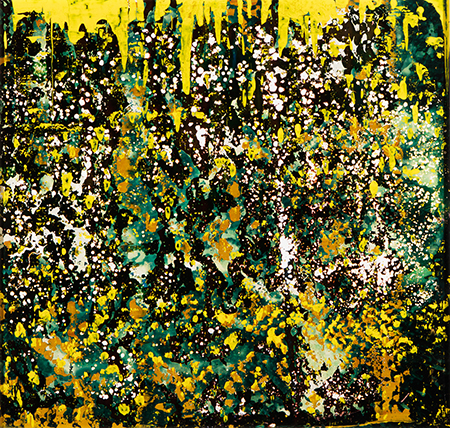 “Mimesis" is the combined result of the union of two talents in the creation of stunning mixed media abstractions. As an abstract painter, Matt Clark contributes an expressive handling of paint and composition; while Jackson Echols provides the groundwork with his elementographic photo system using photosensitive paper, photo chemicals and organic materials. The two collaborate on the extensive process that begins outdoors with the paper exposed to sunlight and covered with organic materials. These consist of dirt, ash or wood chips, in a process that produces an image resembling a photogram. After several days, the large-scale paper media bearing the light induced images is brought into the studio for final modification with an addition of paint used in several abstract idioms, like the dripping of paint or strokes pulled across the surface.

The word “mimesis” itself means an imitation of something in the form an image or copy. This simple definition obstructs the multi-valence that the term carries throughout the history of philosophy and aesthetics from the Greeks to Adorno, who saw mimesis as essential to the “ideal of art” as a counter to commodity culture and the exact replicas or repetitions that make it possible. The artists seem to identify with this reading because they begin with nature and abstract it through their particular process, resulting in unreal and unique images. In "Mimesis 9" an aquamarine froth of molten matter, or possibly deep sea formations of luminous joined particles, fill the surface with motion, life and texture, signifying a mysterious new world. The color scheme fills the entire picture plane with this organic mass of tissue, punctuated with bubble-like forms and fimbriae at the edges that make it feel as if the form is seething and growing. "Mimesis 6” is an evident nod to lyrical abstraction and Jean Paul Riopelle.  A green ground, with hints of white, serves as the base for this energetic abstraction, while drops and forms in red, and lines of black intermingle across the surface. Each piece in this highly recommended show is compelling for their clear and successful visual investigation.