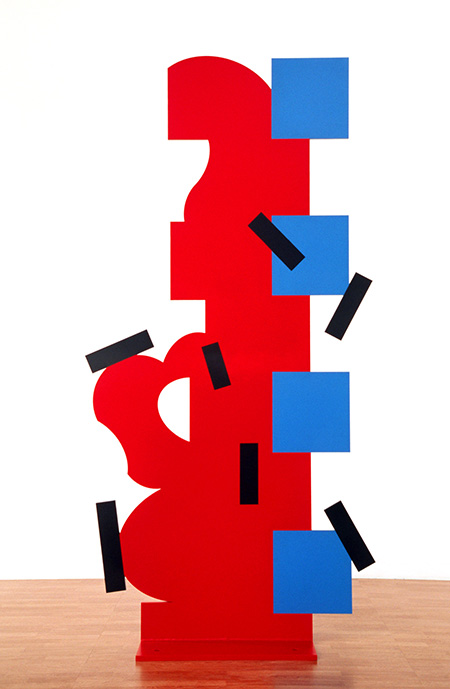 It’s not often an artist is fêted with two concurrent retrospectives, but such is the case this summer with veteran sculptor Mel Katz. Still making rigorous new work at 83, Katz is the subject of an eponymously titled retrospective at Laura Russo Gallery and a more whimsically monikered career survey, “Mel Katz: On and Off the Wall,” at the Hallie Ford Museum.

The Russo show sets the stage with an untitled 1966 oil painting, which shows the erstwhile painter on the precipice of setting painting aside to become a sculptor. With its billowing, colorful gestures overlaying a triangle, the painting foreshadows the dialogue he would soon take up in sculpture between geometric structure and sinuous form. This dialectic continues in the elegant and imposing “Arctic Blue” (1988), an 8-foot-high totemic form in plastic, vinyl and wood that somehow manages to embody both mirth and ruthlessness.

Katz is perhaps best known for his painted aluminum works, such as “Open Pedestal” (2006), which are fabricated from metal cut with high-pressure water jets. In a sense, these pieces are only marginally three-dimensional. Their contours are the same on both sides; they have no protrusions; and they’re less than two inches thick. If you look at them from the side, they appear as a single thin line.

In the Hallie Ford exhibition, there is an entire room of these large-scale works. In many of them, shapes seem to float and dance in space. There are the jaunty, percussive black lines in “Triad” (2006) and the abstracted fruit of “Still Life” (2006). The exhibition is densely packed, perhaps too densely, but the breadth and depth of the works included afford us an opportunity to track recurring motifs over time. The “Gray Series” (1973) and “Shirley Temple” (2008), although separated by 35 years, show the artist in an uncharacteristically subdued chromatic mood, trading bright colors for the simplicity of black and white.

Katz’s métier also owes much to the influence of fashion and tailoring; his father was a haberdasher, and the family’s New York home teemed with patterns, fabric, and cut-outs pinned on a tackboard. These motifs are referenced directly in “8th Avenue Series” (1973), “Patterns” (1983), and a fascinating set of charcoal studies from 2012 that is full of erasures and redrawn lines. It is revelatory to see the artist’s hand restlessly revising forms in these messily organic sketches — a dramatic contrast to the smooth perfectionism of the finished sculptures.

Across the span of more than five decades, certain strengths and weaknesses emerge. Katz’s works in rusted steel don’t have the high-octane impact of his painted works. Wall pieces such as “Orphan Annie” (2011) fall short of the ebullience of his freestanding sculptures. And the cut-out forms in works such as “Alphabet” (1998) too obviously evoke Matisse’s late-career gouache cutouts.

Katz’s most jubilant works are his painted aluminum sculptures of the mid-2000s. They crystallize a life-long love affair with materials and visual ideas; in them we see a sophisticated mind riffing in jazz-like improvisation on the interplay between straight lines and curves, architectonic structure and biomorphic forms, compositional rigor and an ever-present sense of whimsy and joy. With a child-like simplicity Katz evokes trees (“Water Daily,” 2005), abstracted people (“Donut” [2004] and “Daddy Long Legs” [2006]) and cartoonish poofs of air (the black-and-white series of 2008). It is quite simply impossible to look at these works without smiling.