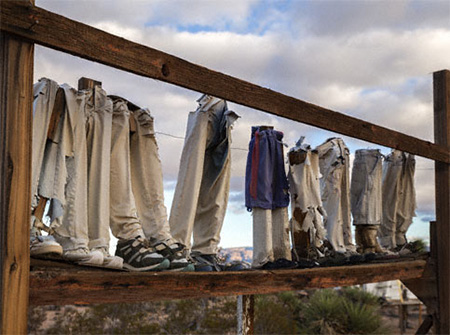 While California assemblage artist Noah Purifoy (1917-2004) remains on the fringes of familiarity to many, his civic leadership shaped the landscape of Los Angeles and forever transformed the Mojave Desert. Inspired by found objects, Purifoy created works fueled by a desire to inspire change, both aesthetic and political. His artistic practice demonstrated an unwavering commitment to engage in a social dialogue regarding civil liberties and equality. “Noah Purifoy: Junk Dada” focuses on the distinctive styles the artist employed from his early work dating from 1965 that used remnants from the Watts Riots, through his later large-scale installations he created on his ten-acre property in Joshua Tree.

Employing a distinctive lexicon to describe his diverse work, the exhibition explores the nuances of “assemblage,” “collage” and “construction.” For Purifoy “assemblage" referred to three-dimensional works that could serve as a standalone sculpture. Collage described a two-dimensional work. Constructions were larger assemblages that included juxtaposed elements. Purifoy first began creating assemblage pieces featured in a group exhibition titled “66 Signs of Neon.” Using debris collected after the Watts Riots, the work spoke to the civic unrest and also coincided with Purifoy’s involvement with the Watts Towers Arts Center, which he co-directed for two years. While developing in-school and after-school art programs to support underserved children, Purifoy maintained his focus on junk art.

In 1976 Governor Jerry Brown appointed the artist as a founding member of the California Arts Council. For nearly a decade Purifoy was committed to civic service. In 1987 he returned to making art and two years later moved to the Mojave Desert, where he created nearly 125 large-scale works. Treating the desert sand with tar and oil based paint, the vast landscape became a public museum of abandoned things — technology forced into obsolesce, scrap metal and driftwood assumed new life.

For the first time eight large-scale assemblage sculptures from the Noah Purifoy Foundation’s Joshua Tree Outdoor Museum will be on display. Among the works, in the construction titled “From the Point of View of the Little People” a wood frame scaffold features the truncated bodies of small children. The shifting weight outlined by pants and shoes are held upright by brittle branches. One can only imagine the small forms peering above the beam to see what is taking place below. Perhaps an allusion to Purifoy’s childhood memories growing up in the segregated south under the Jim Crow laws, the construction speaks to the artist’s desire to use found materials to hold a mirror to cultural issues. And reminds us that “junk” is actually the debris of truth.