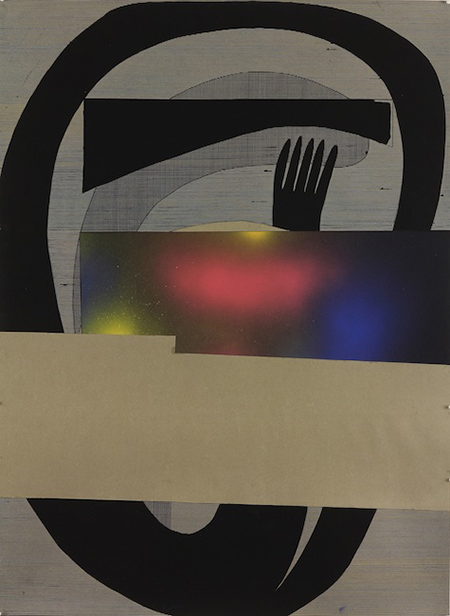 Shaun O’Dell’s mixed-media paintings and other works in “Doubled” look completely au courant in terms of their formal constructions, but an ironic lyricism clings to them, which the artist’s statement (more on this later) helps to illuminate. A wall-mounted array of paper-mache oddments, their familiar gray, oatmeal-lumpy material painted white, suggests artifacts or implements from some unknown civilization. A trio of minutely detailed paintings of airbrushed dots and squiggles atop a digitally printed image that has been pixelated into incomprehensibility questions the possibility of complete knowledge, while transforming the collision of modes into an immersive, compelling visual experience.

An abstraction with jagged black forms at the margins surrounding a gold (and implicitly heavenly, timeless) center/background turns out to be a high-contrast view of architecture against a cloudless sky. Photographic images of ruined classical architecture and an obscured portrait bust are printed on marble slabs. A handmade book, “modeled after the Oxford Encyclopedia of Greek History,” is composed of black pages. Large charcoal wall drawings of a sphere (like the expanding universe), gray and flecked, faces from across the gallery its opposite, a white circle surrounded by gray background radiation. O’Dell collaborates with his wife, Emily Prince, on works entitled “Dust,” which contain traces of their respective making: powdered charcoal fallen to the floor below. This is just a small sample of the work on view, not all of which explores these issues. A number of very fine abstractions live in the eternal present.

Be sure to read O’Dell’s statement, which links past and present; Hitchcock’s film about obsession and memory, “Vertigo;" the "Portals of the Past" in Golden Gate Park, relics from the1906 earthquake and fire; occultism; Black Magic cameras; Chris Marker’s visionary film "La Jetée;" and O’Dell’s great-grandfather’s photograph of Charlie Chaplin, whom writer Christian Berardi sees as personifying “a gentle modernity ... where different viewpoints can meet, conflict, and then find progressive agreement,” i.e., a liberal synthesis of utopian ideals and social realities. (See Chaplin’s still stirring Everyman speech from his 1940 satire, "The Great Dictator") Berardi sees 1977, when Chaplin died, as the beginning of the end of the physical commons, the year of the Apple II and Johnny Rotten’s musical proclamation of the death of the future. Let’s hope that technological humanity proves Einstein wrong and grows up; stay tuned.