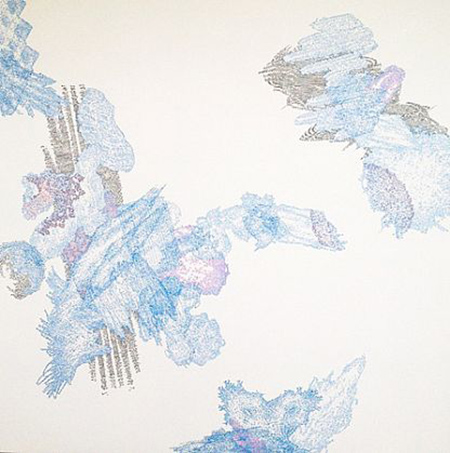 Todd Camplin’s suite of new ink drawings are as dense as they are weightless. They perfectly capture his signature style in delicate and labor intensive images that are heavy on the reds and blues. His former compositions used language such that names, or other text, to form the basis for abstractions done on paper. What can be called lines of text, or streams or strings, flow and repeat themselves in compelling patterns that he expertly renders in free form shapes. Sometimes they form all-over patterns via grids.  In his writings on aesthetics Paul Klee, the Swiss master draftsman, described his methodology, stating that “drawing is the art of taking a line for a walk” or more reductively “a line is a dot that went for a walk.” These statements from a modernist master of nearly a century ago aptly mark a starting point of Camplin’s work.

If initially his technique seems to conform to Klee’s aesthetics, his body of work refuses to tap into Surrealist free association or automatic writing.  For these new pieces Camplin revisits and reformats old graphic design motifs for boxes and packaging done as an undergraduate student. As a structuring device the designs on the boxes are set free from their support and used as templates for stream of consciousness writing that unfolds into the ink drawings. The most striking pieces are the trio of ink on clayboard works (36x36 inches each), the center panel being "Black and Blue Words." Here the blue infused text congregates in three distinct areas of the surface and, like other pieces in the show, leaves the rest untouched so that the densely worked sections seem to float in space far above a limitless ground. The clayboard mounting gives these three an authority that’s missing from the paper pieces that are hinged and framed under glass, so the viewer interacts and experiences them quite differently.