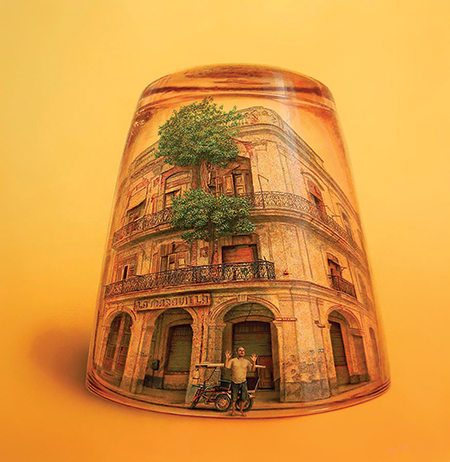 It is fitting that the exhibit “Straight from Cuba” should be presented when high-level talks are currently in progress about normalizing our relationship with Cuba. The rich diversity of art and music in Cuba has long been a major attraction, as the island has an unparalleled distinction in the creative and performing arts.  The three artists featured in the exhibit, Alan Manuel Gonzalez, Darwin Estacio Martinez and Luis Rodriguez NOA, partake deeply of this lush tradition.

Each artist has a distinct theme and title within the exhibit. Gonzalez titles his series “Contained Metaphors,” a perfect description of an artist and people confined to Cuba. It is Gonzalez’ painterly version of a ship in a bottle, except he encases cityscapes and landscapes in bottles and upside down tinted drinking glasses, all filled with intriguing tableaux. In one exquisitely detailed scene, a figure with his Pedi cab presses his hands against the glass, signaling his desire to escape, with an urban slice of Havana in the background. Beautifully rendered, his paintings take on a haunted quality, as when a wedge of dense tropical jungle fills a glass, a luminous landscape completely off limits to all but the Cubans. In another eerie painting, the crumbling architectural infrastructure of Havana is summed up as the distorted façade of the tourist hotel, Habana Libre, sinks down into aqua colored water.

In his series, “Paintings of their Kind”, Martinez personifies the style and verve of the Cubans. His figures are represented in fragmented views of their torso in these large-scale paintings. Colorfully dressed, brilliant hues of blue, lavender and green pop against vivid backgrounds.  Although the faces are not depicted, a sense of resolve and strength emanates from the figures. The brilliant turquoise ground of the painting “Azul Profundo” accentuates the girl with her raincoat in another hue of sky blue, her figure strongly silhouetted by the glowing background. In “The Man with the Black Suit,” the pose of the figure emphasizes an upbeat attitude.

Rodriguez NOA echoes this optimism in his series of mixed media paintings on canvas, “The Island on the Move.” Incorporating the surrealist views of urban Cuba, “It Moves depicts a vintage car that is surrounded by a dense linear interplay of imagery and rhythms. People, cars, apartments all coexist on a sunny yellow surface. His linear depictions echo the whimsy and energy of Paul Klee’s delicate line art, while other imagery reflects Joan Miro’s organic abstractions. While indebted to these artists, he makes his multilayered compositions all his own, as in “La Idea Fugitva,” where people, apartments and light bulbs populate a busy, bustling city in profusion. An old car barrels through a Havana street in “La Guagua” as we catch a flattened cross section of the people inside the car surrounded by the colonial architecture of the city. This lyrical scene has a wry humor that is a testament to Rodriguez NOA's skillful rendering and light touch.

These paintings by three Cuban artists inject a welcome breath of fresh air. Their work is unique, dynamic and directly plugs into the Cuban propensity for poetic imagery.