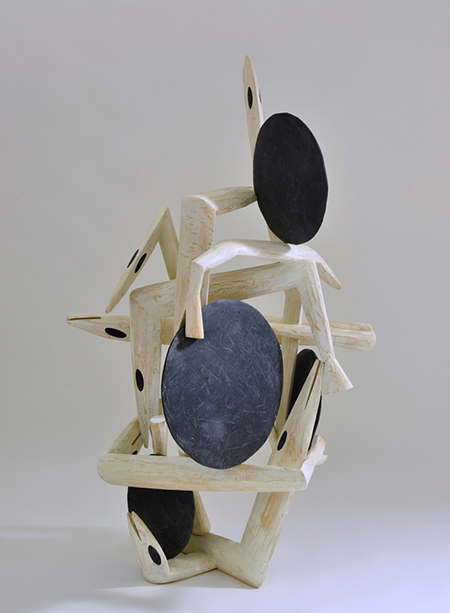 Touching on religion, language, interconnectivity and figuration, sculptor Robert Brady’s wide ranging show, “Gone Fishing,” gently hints without giving too much away. We get a sampling of various forms and series the artist explores in clay and wood. There are several pieces from the artist’s “Language Series,” wall mounted ceramics inspired by Asian calligraphic characters. The resemblance is clear, but Brady doesn’t strive to recreate actual words; the written characters are simply jumping-off points, leaving us to read these loosely intricate works however we like. Sometimes the characters are made of squared-off pieces that resemble Jenga blocks. Sometimes they are round, wide and hose-like, conveying different moods.

Also prominent are the wall-hung wooden works, which generally resemble shields. These finely crafted works, almost flat and mostly monochromatic, are largely inspired by religious figures such as priests, and objects such as a bell. Additionally, there are three rather large (one reaches a height of 8 1/2 feet) wooden sculptures, one of thin, long-limbed (think Giacometti) and stacked human figures — witty associations of a family tree or climbing the corporate ladder are evoked — and the others of intertwined fish.

As varied as the works can be, a common thread that connects all of Brady’s work is their rough-hewn, primitive quality, no doubt the influence of his Nevada upbringing, which brought the artist in touch at a young age with Indian artifacts. Further, having studied under Robert Arneson, Brady reflects the influence of the Bay Area funk movement, as well as artists such as Peter Voulkos. Given these associations, across the board Brady’s work is truly a singular vision.