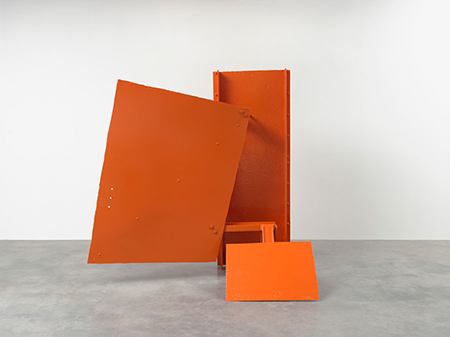 Anthony Caro’s abstract sculpture made use of recycled industrial building materials — rebars, girders, metal plates. He reassembled them, then painted them in bright, playground-cheerful colors. They end up feeling very fresh. The works in this show have been painted according to the Pantone colors designated by Caro’s studio, which has continued to operate since the artist’s death in 2013 at age 88. The show brings together some 14 works from the 1960s, the decade when the artist launched his signature style, and we can sense the giddy exuberance of his discovery and exploration. When sculptor David Smith tragically died in a car crash in 1965, Caro obtained 37 tons of steel from Smith’s studio. In the current show, “Purling” (1969), a series of curled steel pieces welded together that reference a type of knitting stitch, is progeny from that motherlode.

Caro riveted and welded metal components together in unexpected ways. The components are rectilinear and curved; thick and thin; made to stand vertically, horizontally and at an angle. The constant is how Caro imbued them with dynamic balance as they sit directly on the floor. This lack of plinth was a hallmark of his work, from the glowing bright orange "Capital" (1960), where a large steel square is held aloft by a rectangular piece and a counterweight, to the “Month of May” (1963), with its multicolored bent metal pipes positioned vertically against heavy metal panels. The upstairs gallery offers several of his seldom seen “Table Pieces,” begun in 1966. All are meant to be perched on the edge of a table or plinth. They are carefully balanced in shape and weight to sit on the edge, outfitted in very beautiful colors or, in one instance, the high polish chrome of “Table Piece XXXIII” (1967).