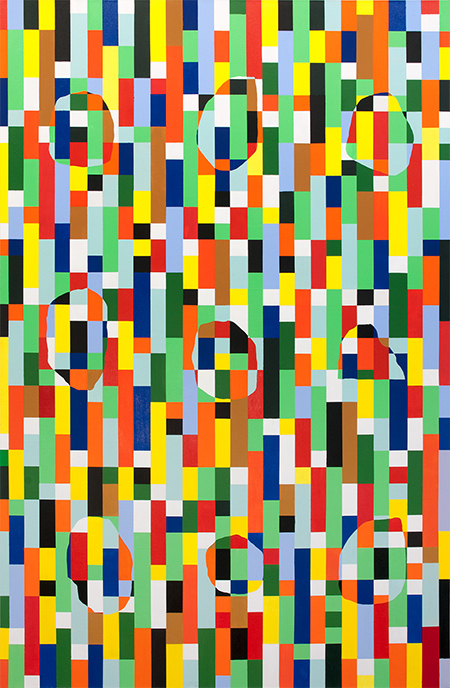 “The Mortimer Trap” is a small but powerful show, with only six brilliantly colored paintings. The title refers to an opening chess move named after James Mortimer in which Black deliberately makes an inferior move to trick White into making a mistake. Storm states that he begins painting with little or no planning, applying color and design by chance, as he moves from one section of the painting to another. He does, however, strive for balance among the various components, describing his process as similar to a chess game in which each move is a reaction to the previous one.

The two paintings in the front gallery, “One Long White Night” and “Fever Tree,” are more strictly geometric than the others. The first one has black and white circles arranged on a bright yellow ground suggestive of chess pieces positioned on a chessboard. Hanging across from it, “Fever Tree” has four distinct quadrants, each containing an icon created from narrow bands and circles. An “X” occupies the upper right, and a tree-like shape fills the lower left, while the other two elements resemble abstracted figures.

The paintings in the inner gallery are more complicated. In “Real Danger. Gambles. And the Edge of Death” Storm presents isolated elements with small vignettes. There are circles and bands here as well, but also what might be interpreted as an aerial map with a hooded figure and other encroaching elements, an empty stretch of highway running alongside a mountain under a dark blue sun, a tree, and other enigmatic symbols. “Acid Hatchett” is a labor-intensive piece in which numerous squares and rectangles are taped off and painted side by side, resulting in intense color interactions. Close viewing reveals nine circles barely discernible amid the geometric patterns.