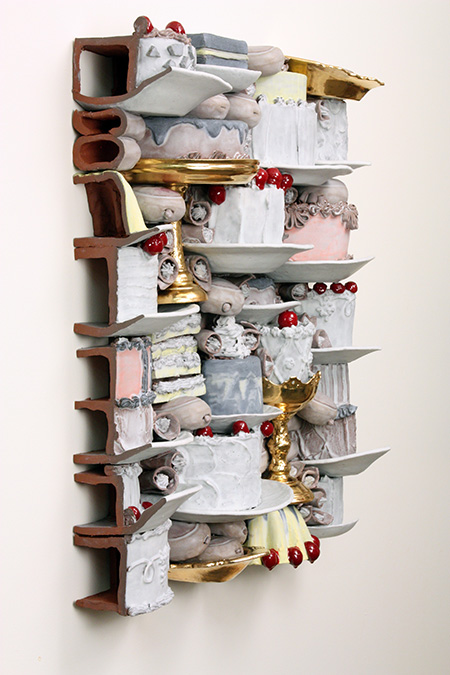 Ceramic sculpture has often had its own parallel history to sculpture executed in other media. It was only starting in the middle of the last century that Peter Voulkos first grafted it onto abstract expressionism; soon afterwards Robert Hudson and Richard Shaw were aligned with the trompe l’oeil side of surrealism. Dirk Staschke takes that hyperreal dimension to a new level: symbolic realism. Widely represented in ceramic museum collections in Texas, Alabama, New York, Arizona and South Korea, the Alfred University graduate has also had solo gallery shows in New York and Philadelphia, as well as his first solo museum show at Bellevue Arts Museum three years ago.

Because the nine still-life sculptures in ceramic picture frames all have their roughly constructed backs exposed, there is one central idea that jump starts the entire show: all reality in clay art is devised by hand. It’s a trick, a tediously familiar gimmick that goes back at least 40 years to Howard Kottler’s deconstructed cup molds. What could be more accessible than low-relief pseudo-paintings of floral, fruit and food still lifes, all elaborately and realistically carved and carefully glazed? A second idea is afoot: how painting and sculpture differ or merge depending upon the context or, in this case, frame, which Staschke refers to in his “Translation” series.

“Translation #1” upends a rooster and pigeon with a powder horn, symbolizing death and plenty, as did 17th-century Dutch still lifes, surely a model for the 44-year-old Portland-based artist. From the back it reveals unglazed, stacked-up wedges and layers of red clay which support the frontal scene. “Translation #2,” with its hanging pork slab and sausage, along with doves, duck, rabbit and ham, suggests the ingredients for a pâté, not deconstructing something, but pre-constructing it. Similarly, “Translation #3” shifts to bland sexual symbolism, setting ripe gourds and cut-open melons near a golden vase of fresh-cut flowers. Fertility, desirability and female anatomy are all exquisitely executed as fruit and flowers. This conceit can only go so far before occasionally chugging to a stop. Hardly conceptual or symbolic, the roses and daisies in “Translation #4” are set in a white vase atop a lace tablecloth. With the gilding on the corners of most of the frames, one can either embrace such kitschy effects — and enjoy a good laugh — or turn away. Ceramic history is often an unavoidable subject in the still lifes. Staschke cannot resist “building” two antique blue-and-white Asian vases in “Translation #5,” seen only in half-relief, filled with greeting-card roses and camellias.

Setting aside the current “Translation” works, “Swan Song” (from 2007) harks back to the artist’s phenomenal ability to fashion realistic flowers and plant forms. With its own 360-degree integrity, the overflowing conglomeration of elements — melons, grapes, squash, flowers, crab claws and shrimp — is bathed in a milky overglaze that falls midway between semen and cake frosting, beautiful but also unsettling. Following “Swan Song,” “Birds in Hand” is an unframed cascade of dead birds, but perched on a shelf. “A Confection” recalls Wayne Thiebaud with its wall-mounted assemblage of cakes, éclairs, pies, napoleons, and cannoli, lusciously glazed and jammed together on tiny ledges.

Staschke’s remarkable ability to handle clay and fashion realistic objects usually overrides his thin ideas or self-conscious historicism of art-historical styles. However, it should not be surprising that such an ancient medium is often rooted in the past for its sources. The tighter alliances of Voulkos and Arneson to abstract expressionism and surrealism need not be repeated by younger artists, but such a significant rediscovery of trompe l’oeil representation as Staschke’s starts to make the late Marilyn Levine assume a growing stature. In this way, American ceramic history evolves within and alongside the broader history of fine art.