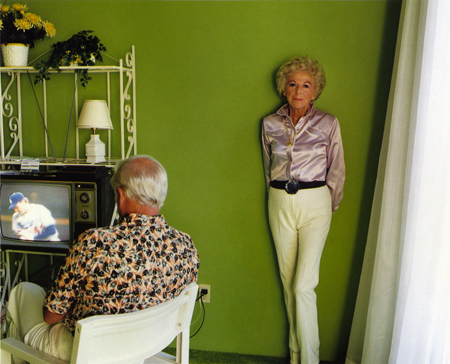 Rarely does work that is, for all intents and purposes, documentary photography, carry as much density, relevance and visual intensity as Larry Sultan’s. His most notorious work comes out of his circa-turn-of the- 21st -century series “The Valley,” within which he recorded the down-time moments on- and off-set of pornography films, shot in neighborhoods like Woodland Hills. Despite depicting, at least in theory, moments of banality (two crew members nap on either end of a couch, an actress in curlers posed nonchalantly between them), Sultan extracted every ounce of baroqueness from them. Their inevitable proximity to the onset action, however contrived, permeates the vintage kitschy Valley environs.

There are great non-porn industry images here as well, including an adolescent perched meditatively on a high-end suburban roof above a backyard expanse, his pose invoking something between impending suicide and private superhero-dom. Other attention-holding series include the late '70s/early '80s “Swimmers,” featuring dramatically surreal underwater portraits, and the relatively recent “Homeland,” with Latino men moving biblically through sweeping Bay Area landscapes.

Yet the works arguably most associated with Sultan's oeuvre and eventual legacy are the photos he took of his parents — mostly separate, even when together — from the series “Pictures from Home” (1983-92). The vulnerability conveyed by these portraits, more implicit than explicit, can be cycled back to the artist himself as much as his aging retiree parental subjects, as their exposure, whether via carefully constructed repose or cinema verité, is, by necessity, also the artist's. It's a dynamic that recalls writer Philip Roth: family is where the gold is, but just what to expose or withhold remains a persistently tricky path to navigate.