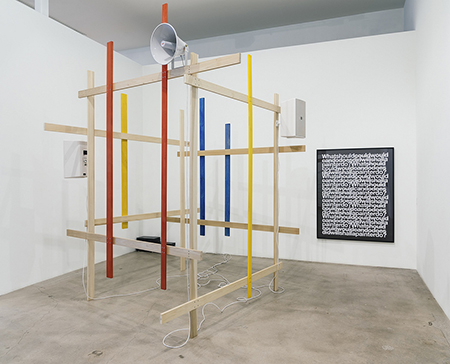 David Schafer is a conceptualist whose sculptural and sound works add up to more than meets the eye. The works in “Models of Disorder” span 2002-2012 and while each project is a discreet investigation, collectively they become part of a larger experience. Walking around the installation requires time and concentration, as all the sounds do not play concurrently. It is necessary to move from piece to piece when the sound plays in order to experience each work in full.

There is plenty to look at, as well as to read. A text informs a sculpture which in turn contains sounds that flow from precisely chosen and placed speakers. Schafer is a scholar and a historian. While his works may reference the known — like Marcel Breuer’s Whitney Museum or Barnett Newman’s paintings — they venture toward the obscure, though not without wit and humor. Schafer’s works go beyond the surface and convincingly integrate the formal with the intellectual.