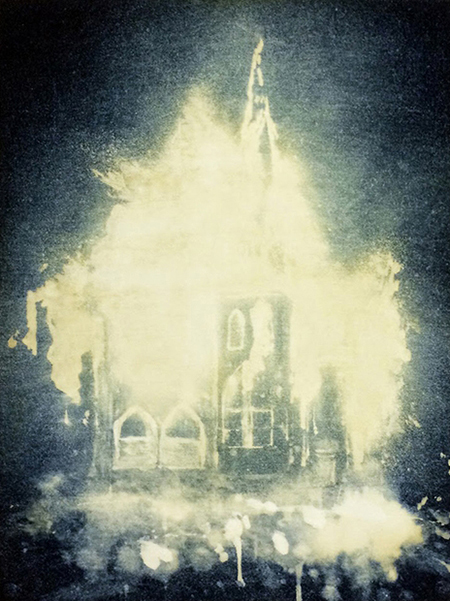 William Binnie's bleached denim conflagrations carry a rather heavy novelty factor, but their inspired craftiness keeps them lively enough to earn them the benefit of the doubt. In a show titled “Fame as Flag,” Binnie takes as his subjects burning churches, homesteads and cars alighted by car bombs — as well as a burning American flag, and a series of ballpoint-pen-on-paper drawings depicting damaged flags. His mastery of bleaching thoroughly impresses for its ease with representation. Binnie hits the screaming white highlights of an inferno's intensity through high-octane erasure, the reverse washes and splatters providing their own special brand of painterliness.

There is a disconnect, though, in the use of dark blue denim. Presumably it's an ideal fabric to withstand the heavy abuse that come with the bleachings, but denim is forever blue jeans, an inescapable association that separates these objects from their fiery scenarios. As much as the car-bombed and home depictions demonstrate Binnie's ability to achieve his own form of realism, the more abstract and nearly disintegrated the pieces become, the more successful. But these are in the minority. Otherwise, he falls into the typical traps of realism, which are limited by the constraints of emphasis on craftsmanship. Leaving more uncovered, and less known, tends to be the best way out of these circumscribed scenarios